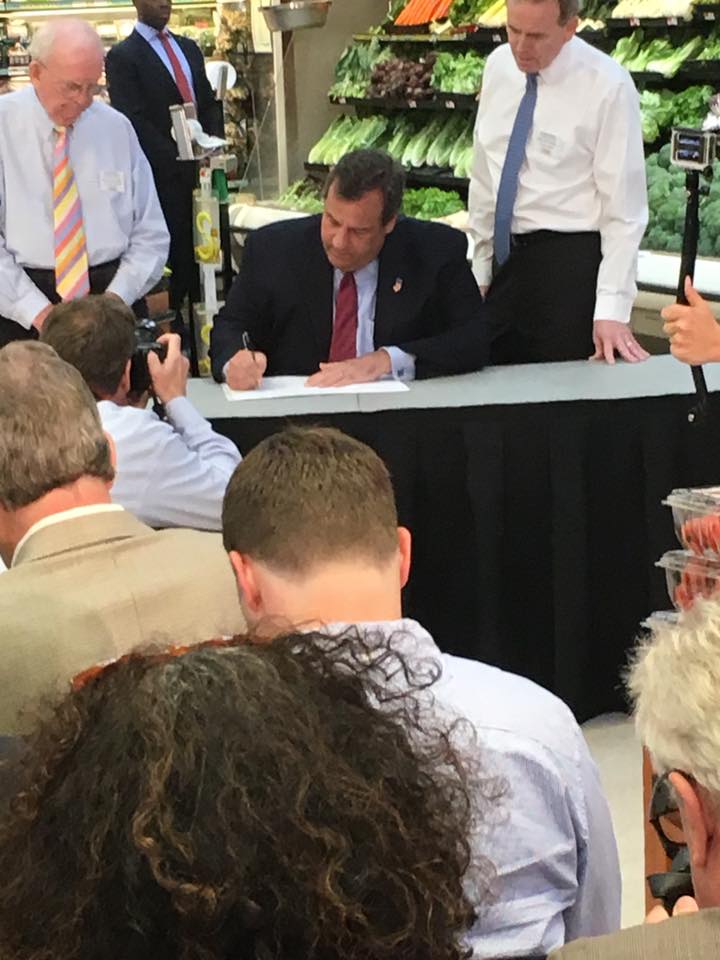 Governor Chris Christie visited Pennington Quality Market on Tuesday to veto Assembly Bill No. 15 which, if it had become law, would’ve raised New Jersey’s minimum wage to $15 per hour by 2021.

N.J. Democrats pushed ahead with the economically ruinous legislation notwithstanding the mountain of evidence portending disaster; Seattle’s own attempt to gradually raise the minimum wage to $15 resulted in thousands of lost jobs.

The Governor told attendees at the veto ceremony that he was safeguarding the state’s economic progress.

$15 per hour? A “radical” and reckless move in the Governor’s opinion.

“Despite having a constitutional mandate in place, the legislature now wants to increase the minimum wage by almost 80 percent just three years later,” explained Governor Christie.  “While this bill’s proposed increase surely is responsive to demands from Democrat legislators’ political patrons, it fails to consider the capacity of businesses, especially small businesses, to absorb the substantially increased labor costs it will impose, killing jobs and erasing gains of more than 275,000 private sector jobs since 2010. I cannot support a bill that undermines the positive results we have achieved in New Jersey and I am returning A-15 to the legislature with an Absolute Veto.”

The National Federation of Independent Business (NFIB) celebrated Christie’s move, noting the Assembly’s bill would have resulted in 70,000 lost jobs over the next decade.

“Proponents of this bill have apparently lost sight of the fact that the minimum wage rate was designed as a starting point for people new to the workforce, not something that was ever intended to feed entire families. We will aim to educate the public on the side effects of raising it to such an exorbitant amount. We certainly hope that voters in New Jersey will see that this campaign has been about advancing a political agenda all along and will not only fail to stabilize our state’s economy but create greater fiscal uncertainty,” said NFIB New Jersey state director, Laurie Ehlbeck. “Governor Christie will not be in office forever, and it is time for us to look toward the future and ensure that voters are cognizant of the detrimental impact that policies like minimum wage increases will have to the state as a whole. $15 an hour minimum wage isn’t just a dangerous game to play with jobs in New Jersey, it could wind up being the final nail in our fiscal coffin.”