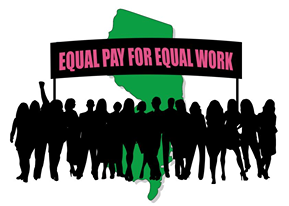 If you repeat something enough times it does not become truth, Save Jerseyans but that doesn’t stop left wing groups or the Democratic nominee for President from repeating the debunked lie that women earn 77 cents for every dollar men are paid.

I won’t waste my time explaining what’s already been thoroughly documented and discredited here, here, here, here and here, and about a gazillion other places concerning the so-called “wage gap” (including right here by our very own Matt Rooney).

But now the big lie has been expanded to include another shocking claim: Black women in America earn 19 cents less than white men across all income levels and occupations.

In case you didn’t realize it, you are supposed to be outraged, appalled, disgusted and ashamed. And if you’re white, those emotions should be amplified times 50 and a feeling of nauseating guilt should be filling your chest at this very moment.

For heaven’s sake, sit down before you pass out because it gets worse!

According to a new study released this Tuesday conducted by the National Women’s Law Center, black women in New Jersey make 60 cents for every dollar white men earn.

That ranks the pay disparity between white men and black women at the second widest gap in the entire nation:

Left wing groups will marry themselves to these numbers and claim that they imply systematic sexism against black women.

But is that true? In truth, the stats are misleading at best.

For example, one of the occupations the study lists as a gross example of income disparity is in the medical field, specifically among physicians and surgeons. The argument goes as follows:

On the surface this sounds like a good comparison – – physicians and surgeons – – but it really only scratches the surface and leaves many questions unanswered.

What type of physician? What type of surgeon? What is their work ethic? Are they on call or do they work office hours? Do they have a flexible work arrangement? Are loan repayments a part of their compensation package? Did they attend an ivy league college or a state university? Are the men and women single or married? That matters when you consider what type of work/life balance they might desire.

None of these questions are taken into consideration in this study. Critical details are left out of the analysis.

Instead, it compares all surgeons by race and sex, regardless of area of expertise – – which in the medical field can be the difference of an average yearly salary of $510K (orthopedic surgeon) and $280K (neurologist).

These numbers are theoretically comparing an orthopedic surgeon who has decades of experience under his belt to a neurologist who just finished her residency. Their compensation is definitely, and RIGHTLY, going to look different.

Bottom line is that there is more to the numbers than the numbers themselves. As with all statistics and research, details matter and can make or break the validity of the information being disseminated.

On average, it takes black women until today to catch up to white men's 2015 earnings. Time to close the pay gap. pic.twitter.com/5eYBD4Y7Mr

Liberals like Hillary Clinton will use statistics designed to fit a certain conclusion in order to continue “fighting” the fictitious, never-ending #waronwomen when, in reality, the black woman pay gap is, at best, another attempt at muddying of information to suit a political agenda.

We need to wake as many fellow women as possible up to this self-serving political scam!