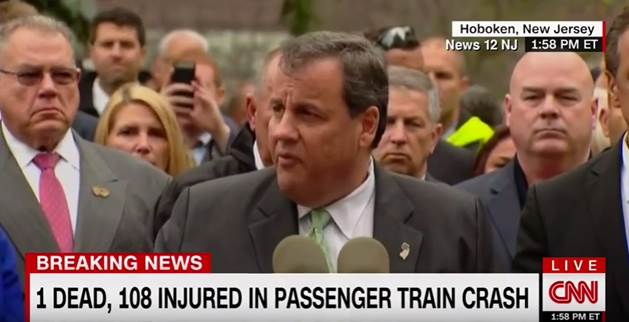 HOBOKEN, N.J. — With questions already mounting in the wake of Thursday’s mass casualty train crash, Governor Chris Christie ventured to 2 Hudson Place in Hoboken to stand side-by-side with New York Governor Andrew Cuomo to brief the press and, above all else, urge caution as officials investigate the grisly N.J. Transit accident’s causation.

“My admonition when I was U.S. Attorney all the time to my prosecutors and agents was, don’t jump to conclusions, let the facts lead you to the proper conclusions, and so we’re not going to speculate about the cause of the accident. It is that we’re in the midst of an investigation,'” Christie explained. “I was called by the White House today as well. They have not only dispatched the NTSB and the Federal Railway Administration but also have pledged any resources that we need additionally to deal with the victims or to deal with what’s happened here at the Hoboken Terminal.”