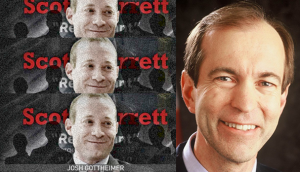 Garrett says his disagreement isnt with gay candidates, but with Republicans who support gay marriage. And attorney Matt Rooney, a conservative blogger on state politics, says that position won’t cost him support.

“If gay marriage is one of your top issues, you’re not probably voting for Scott Garrett anyway,” Rooney said.

And currently, even Democratic polls show Garrett holding a small lead in the race.

Rooney says no New Jersey Republican has an easy path to victory, but there is still a numbers advantage in the 5th District. While Mitt Romney lost New Jersey by 17 points in 2012, Garrett won easily. “He’s reasonable and he speaks with a tremendous depth of knowledge on the issues, he doesn’t comport with the caricature they try to paint,” Rooney said.

You can listen to the audio version below: