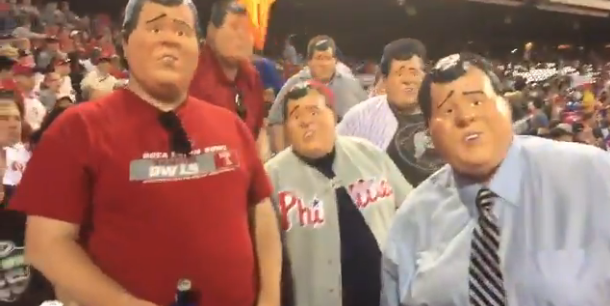 I love this one, Save Jerseyans. Truly do!

Check out how some Phillies fans decided to dress for Monday’s Philadelphia home game hosting the New York Mets:

This is my favorite video from last night. The Chris Christies jamming at the game. Mets may have won but @GovChristie is always a loser. pic.twitter.com/iTMtmhV3pD

Remember: our Cowboys-loving Governor is reaping what he’s sown on this front.

His antagonism towards Philadelphia sports (and the bottom half of his own state that is predominantly pro-Phillies sports) has been consistent (and at time over-the-line nasty) throughout his term in office. Possibly by design? There’s rampant speculation that, in light of his quasi-exile from the Trump inner circle, the former presidential candidate is gunning for a New York market media gig.

The most recent broadside?

“The Phillies suck,” Christie declared during an appearance on SportsNet New York last month. “Let’s just start with that. They’re from Philadelphia. They’re an awful team. They’re an angry, bitter fan base and it’s not safe for civilized people to go to Citizens Bank Park if you want to root for the other team. Ya gotta believe what? Ya gotta believe we’re awful people!”

Apparently the feeling is (still) mutual.

Christie did take the “tribute” in stride:

@AngeloCataldi @WIPMorningShow Thanks for the tribute tonight. Hope you enjoyed the game as much as I did! Can't wait to visit again. #LGM