Post-AHCA, MacArthur Pushes Back Against Outside Forces Besieging His District 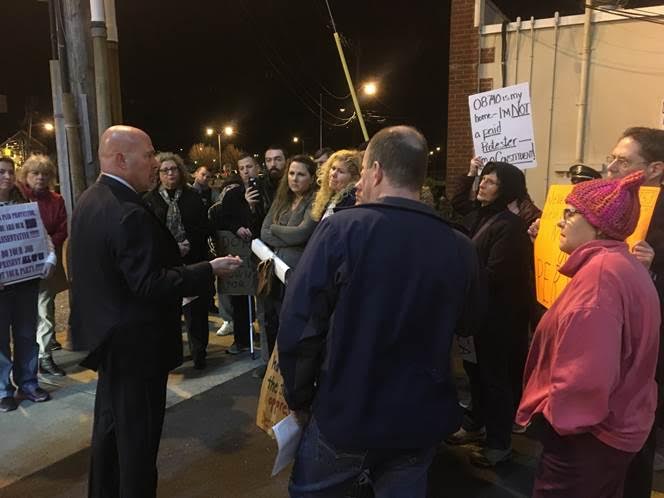 Tom MacArthur (R, NJ-03) worked hard to get the AHCA done, Save Jerseyans, and in the process forged a position of influence for himself as a bridge between the House leadership and the Trump Administration.

It came at a cost.

The legislation failed and groups from both the political left and the right have invested money in Third Congressional District advertising to let MacArthur, a co-chairman of the moderate ‘Tuesday Group,’ feel their anger. Those groups include the conservative organization “Club for Growth” and the liberal organization “Save my Care,” but MacArthur says some of the leftist organizations are the parties responsible for driving protests outside of his district office.

He held a press availability on Wednesday in Marlton to offer a counter-point.

“During my 27 months in office, I have met with literally thousands of constituents, a great number who hold opposing viewpoints,” said Congressman MacArthur. “I value their engagement and their feedback.  Representing a congressional district that twice voted for President Obama in 2008 and 2012, and then voted for President Trump in 2016, means that I have constituents who are good and decent people, and even next door neighbors and friends, but who hold completely different views on politics and policy. It’s my job to represent them the best I can.”

“I came to Washington to roll up my sleeves, and work with both parties to shape policy. That’s been my approach to finding solutions to tough problems, like repairing our health care system.  And because of this—I’ve been getting attacked from outside group from both sides of political spectrum,” MacArthur continued. “One ad is even falsely claiming that I support legislation that would not cover pre-existing conditions—this is simply not true. I have never and will never support legislation that does this. It is important for my constituents to know the truth that well-funded and highly-organized special interests, in some cases even masquerading as constituents, are pushing political agendas and intentionally misleading them on my positions.”

In a follow-up press release, the MacArthur media team included a memorandum detailing the hundreds of thousands of dollars spent on ads targeting the Republicans as well as evidence of alleged coordinated efforts to protest MacArthur’s district office and events. One cited instance involves an email forwarded to the Congressman’s team authored by an organizer for Indivisible, the group credited with organizing this spring’s GOP House town hall protests, in which the organizer says another liberal organization is seeking protesters from “other districts.”

“I’m excited because NJCitizenAction has a lot more resources than any of us,” the organizer explains. “If we start coordinating our actions, we can put a lot more pressure on MacArthur.”

MacArthur has held a live town hall as well as remote town halls this year; he also garnered media attention for mixing it up with protesters and a surprise drop-in at a local Burlington County Democrat club’s meeting.

“This is no way to fix problems—we need to work together and compromise in order to achieve real change,” he continued. ”

It’s time for all of us to respectfully discuss the differences we have so we can find solutions, instead of pointing fingers.”

First elected in 2014, MacArthur coasted to his first reelection last November but, as he noted, the district remains one of the state’s last genuine “swing” districts in terms of partisan composition and presidential voting history.

1 thought on “Post-AHCA, MacArthur Pushes Back Against Outside Forces Besieging His District”