An Inimitable Man Who Never Flinched 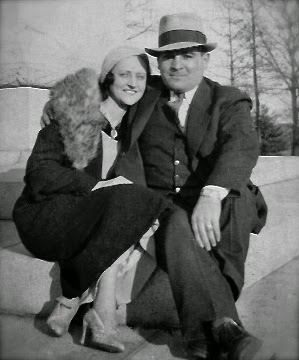 On Father’s Day so many memories of my dad rush forward.

But mostly my mind tumbles back to the gritty, industrial city that I grew up in — a riverfront city that didn’t realize back then that its glory days were already behind it. It’s a bleak, damp, gray December day but I’m warm and secure in the confines of my father’s old Plymouth as we rush from place to place through narrow city streets marked by row houses and the occasional corner store.

We don’t speak very much but I’m so happy to be with him. He’s making lots of stops, picking up small treats and gifts from a variety of friends and business people for whom he may have done odd jobs during the year. Whatever he manages to gather will help to make our Christmas a bit happier.
Even in the run up to Christmas, he’s a tough negotiator. He barters with merchants and grocers. as he tries to select just the right provisions for our Christmas feast. He maneuvers through and around streets, neighborhoods and landmarks with the swiftness of a true native.

His energy fills the room wherever he goes. He’s not a big guy but he makes a huge impact. He fears no one and his self-assurance seems as natural as the space he inhabits. Instinctively, I know that as long as I’m by his side, no harm can come to me.

The best dads give you a great sense of security.

And in a myriad of ways my dad prepared me for the day when he would no longer be at my side. He did that by example. I’ve already enunciated the important things that I learned from him — lessons that make me who I am today. These included the endless admonishments to “put a smile on your face” and “be nice to everyone because you never know who you’re gonna need in this world” as well as “drop the subject” which was always his plea whenever I spent too much time rehashing something that was over and done with.

Yes, for a long time I thought I was as different from my dad as anyone could possibly be. But, as the years go by, more and more I find that such an assessment simply doesn’t square with the person I’ve become. And these likenesses can be found at both ends of the spectrum with surprising intensity.

Of course, my dad was a matched pair with my irrepressible mother (both shown above in a photo from the 1930s). Their 55-year marriage was a testament to that.

Yet, dad was always his own man. He could not be cowered, nor was he easily deceived. And if you pushed him too far, he was likely to respond in kind. Though he could be combustible, my mom (and all of the rest of us) liked him that way. We respected him for it because we knew that he was a passionate man who was comfortable with his own feelings. So, his feelings were right out front. And yes, he taught me that’s it’s OK for grown men to cry now and then as well.

But there was something more that has remained with me more than 25 years after his death – a life force, an undefinable core of strength that can only come from love.

God willing, that reserve of strength, that unyielding love will carry me into the years ahead and the moment when I will be reunited with him. For now, his loving spirit sustains me every single day.