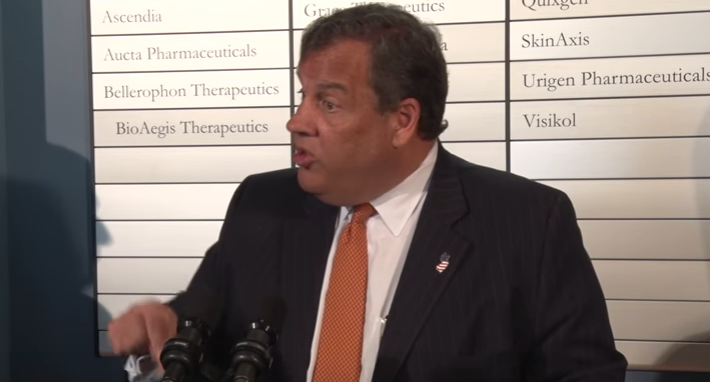 Gov. Chris Christie visited the Commercialization Center for Innovative Technologies in North Brunswick to celebrate good news on the New Jersey jobs front, Save Jerseyans, but he had choice words for the assembled members of the media whom he believes go out of their way to ignore his Administration’s economic accomplishments.

Love or loathe him, it was vintage Christie:

Governor Christie:  Yeah, well I think that’s predominantly because you guys don’t report it. You just don’t. Every economic story starts with 11 credit downgrades as if that means a thing to people in terms of their everyday life. But that’s the way you guys do it, and you report three year old statistics that we were lagging behind in the recovery, that we didn’t recover our jobs from the recession as quickly as other states. All that’s true, but now we’ve well exceeded those numbers, and we’ve gone past those other states. But those reports don’t get made, because you don’t do it. I mean, I typically don’t try to blame you all for things that happen you know in government, but this one is completely on you. You don’t like to report the positive. You like to report the negative, and if people don’t know the unemployment rate is 4.1 percent, it’s the lowest one in 16 years, it isn’t because I haven’t said it. I’ve said from behind this podium and other podiums over and over again. You don’t report it, and you don’t report nearly as broadly and without you know big font headlines. You don’t.

Michael Aron: If you say it, we report it.

Governor Christie:  Michael, that’s just not true. Ok, and you can say it but it simply not true that theirs reporting and reporting. There’s repetition, there’s the prominence that it’s placed, whether it’s on your news program or in a newspaper or on a website. There’s the headlines that are used, how prominent are the headlines, how positive or negative or neutral are the headlines. You understand there’s subtleties to this. If you and I want to go through it at the press conference that you guys downplay the good economic news in this state, I’m happy to go through it in detail because it’s part of what I observe. But how else are people supposed to know about this unless you report, and if people don’t know if there’s one of two reasons, either because I didn’t say it or because you didn’t report it. Well, we know I’ve said it. So maybe you guys have to do a better job of reporting the good news in the same way that you report the bad news. I mean, what do you think is more important to people? The fact that there’s more people at work in New Jersey at any time in the State’s history or some of the nonsense that you guys report repetitively over and over again, because you think it gets you clickbait. I mean, you all know this, like you know when we talk privately you all acknowledge this. Ok, you acknowledge that these games get played. That’s fine, I understand and I’m part of this business where these games get played, but don’t sit here and say to me why don’t people know this. Come on. They don’t know it because you don’t want to tell them. I mean, because good news doesn’t sell and bad news does. Because attacking people sells and praising people doesn’t. And that’s just the way it is. So like I’m not complaining about it and I didn’t bring it up, you did. Ok, so you want to know why people don’t know, it is because you guys don’t do your job in telling them that kind of news and emphasizing it and reemphasizing it. Because it is a good story and you know it’s the same thing about you know stuff with the Jersey Shore. You know, I can’t tell you how many times when I’m at the shore, which as we know I’m there frequently, you know that people come up to me invariably and say how great a job we did in the recovery from Sandy. How grateful they are for what we did. You saw report this week in New York, that New York’s rebuilding program of their homes is well behind us and $500 million over budget. The New Jersey rebuilding program well ahead of New York and under budget, under budget to the point where we’re able now to move money from the rebuilding program to Blue Acres to be able to buy more repetitively flooded property so those people won’t get damaged again. Has that story been reported? I haven’t seen it anywhere. Yet I see repetition from editorial writers and columnists in the state that we somehow bungled the Sandy recovery. Go talk to the people at the Jersey Shore you’ll be able to find five or 10 who are angry, the same way you’ll be able to find 20 or 30 who defrauded the system, and they’re angry because they got caught, all right? But the fact is that the bad stuff gets reported and  repeated, and repeated, and repeated like 11 credit downgrades. But 4.1 percent, unemployment the lowest unemployment in the region, more New Jerseyans employed than any time in the history, lowest unemployment rate in 16 years, better performance than any of our neighboring states, that will not, you may report it today but it won’t get repeated over and over again. But man you guys have like 11 credit downgrades on F3, just hit the button and insert that paragraph, right? Cut and paste time. Which of course is also a mischaracterization because it’s really three credit downgrades, not 11, because there’s three agencies who did it three times that gets them to nine. It’s three credit downgrades really but you know, I understand the games you guys play and how you want to do it but I’m not going to sit here and moan and complain about it on my own, but if you give me an opportunity to I’m happy to. And so you want people to know about this, you want people to feel better about the state? Start reporting the good stuff, start reporting it because man let me tell you something, here’s what I can guarantee that people already know. They already know, you don’t have to go over this anymore, they know I was on the beach on July 3rd. That they know, you guys have made sure of that, despite the fact that I told them a week before that I was going to be, they know that. They know there were 11 credit downgrades, you can put that one aside if you’re concerned that people don’t know that. But you’re right, Michael, people don’t know it and feel it, and the reason that they don’t know it and feel it is because you guys aren’t telling them because that’s where they get their information from the web, from you guys, from TV, from the printed papers. That’s where they get it. It’s not like I haven’t said it, I’ve said it plenty.