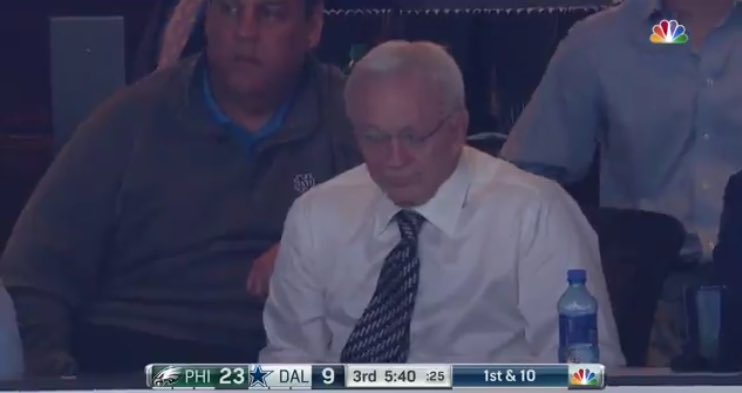 The 5-4 Dallas Cowboys looked poised to fall (badly) before the 8-1 Philadelphia Eagles on Sunday night, Save Jerseyans, and owner Jerry Jones wasn’t the only one caught on camera looking a little blue about it…

And the Internet was merciless:

Chris Christie thinking nows probably not a great time to ask Jerry if the Ice Cream cart is still coming in the 4th quarter pic.twitter.com/bAxK4IzuwE

Jerry Jones: “Do you know how to block a commissioner from getting a new contract?”

Chris Christie: “I know how to block a bridge.”

Chris Christie, back in the owner’s box
(owner also does big business with the Port Authority, which Christie runs, but we never did find out how much Christie receives in free flights & tickets to owner’s Cowboys games) pic.twitter.com/7ef65JpgEl

Outgoing Governor Christie (who cheers for the Jets and the Cowboys) has been a frequent guest in Jones’ box; he’s also frequently dismissed Eagles’ fans — who comprise something like 1/3 of his New Jersey constituents, concentrated Trenton and south of the city — as “angry, awful people.“

The Eagles led the Cowboys 37 to 9 with 7 minutes left in the 4th quarter.