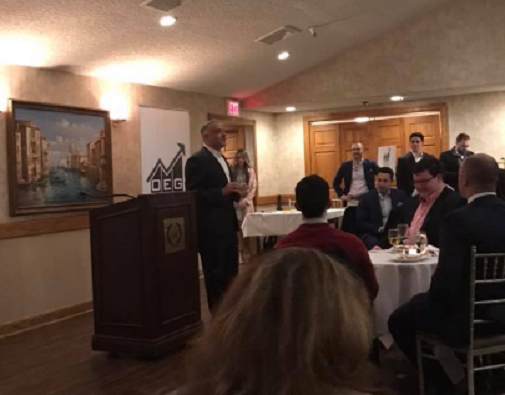 On Thursday night, Wayne businessman Joe Caruso officially launched his new PAC, The Organization for Economic Growth, pulling in over $12,000 from a crowded event at Biagio’s in Paramus.

Politicos from Bergen, Passaic, Essex and Morris counties were among the attendees.

“You have a state with deep sea ports, Fortune 500 companies, unbelievable resources… and it’s broke,” said Caruso. “That is the fault of the legislature in Trenton and it needs to change.”

But while speculation was ongoing over whether he would enter the crowded NJ-11 royal rumble, announcing the formation of an exploratory committee on Tuesday, Caruso dismissed any intention to enter the primary to replace Frelinghuysen in his Thursday evening remarks while expressing hope that OEG could help play a role in supporting pro-business candidates to take on the Democrats in November.

Caruso, long-known for his ability to fundraise, is returning to active political participation after a semi-long hiatus to focus on business and family.