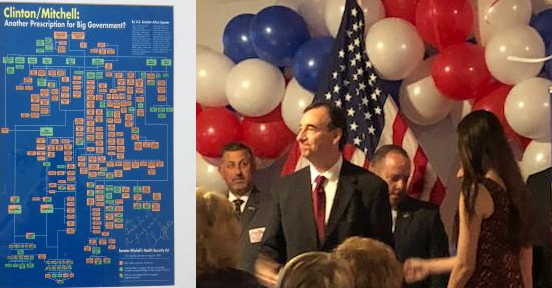 Did one of the two Republican candidates in NJ-05 help kill Hillarycare, the doomed first term Clinton Administration health care overhaul championed by the former First Lady and considered a precursor of Obamacare?

It’s a matter of dispute.

This week, attorney and former Cresskill councilman John McCann hit back at supporters of his primary opponent, former Bogota Mayor Steve Lonegan, for challenging his claim of having played a central role in the legislative push back against the unpopular 1990s bill which ultimately helped catalyze the 1994 GOP Revolution of Newt Gingrich.

McCann posted the following proofs on his campaign website’s blog:

August 10, 1994 (which was also on CSPAN): *Specter asks for Advise and Consent to admit McCann admit to the Floor during the Health Care Debate.

“In the summer of 1994, the Senate rejected the Clinton proposal to take over one-seventh of the entire U.S. economy in large measure because of John McCann’s charts and graphs which clearly showed the flaws and weakness of the proposal,” the statement reads. “My colleagues and I not only appreciated John’s insightful approach to a complex issue but, in reviewing his work, I learned also that he was a person people could trust.”

“The work I did against Hillarycare helped save both the American economy and healthcare system from a terrible idea,” declared the candidate.

McCann and Lonegan are battling for the right to challenge freshman Democrat Josh Gottheimer, an ally of the Clintons, in this November’s midterm election.