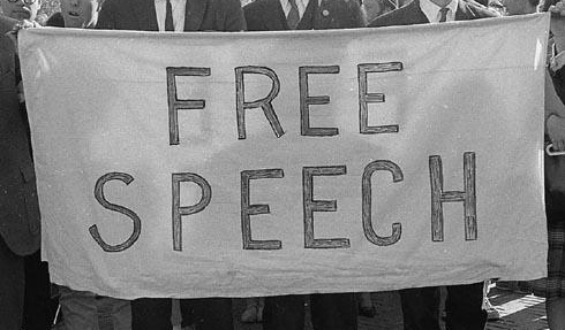 I have been in college now for three years, and being a political science major, you get to experience many differing political views. I think this is a necessary and an amazing thing; I love the lively respectful classroom debates, because at the end of that class, a liberal colleague and I may not agree on political views Bbut we will agree that the New York Yankees are the greatest baseball team ever.

People with common sense realize we are all Americans and we love our great country. How lucky are we that we live in a country where we can express our views whenever, however and wherever we want respectfully… or at least that’s how it is supposed to work.

Unfortunately, more often than not, if you are a conservative in an American college chances are, the Universities’ administration and employees will not give you those same constitutional rights as someone who is a liberal. They will not give you that God-given right to respect you deserve from other human beings.

Why is it okay that a student who does not have a far-left worldview to feel as if they need to lie, and mirror the views of Elizabeth Warren or Bernie Sanders, in order to receive a passing grade?

Why is it okay when, after you raised your hand in class when the professor asked, “who voted for Donald Trump,” professors and other students can impugn your character in front of everyone by calling you racist, sexist, and xenophopic?

Why is it okay that 22 year old Siena College student Zack Butler is facing possible suspension/expulsion after printing out 600 copies of an email from a professor, Jenn McErlean, in which the professor stated, conservative students make her “miserable?”

Click here to learn more about Zack’s story over at CampusReform.org.

Zack (who is a resident of Wayne, New Jersey) and I went to the same high school freshman year; beyond that I have not really spoken to him since 2012.

I do remember Zack as a kind person who was also a leader both inside and outside of class.

When I saw the aforementioned article by CampusReform.org on Tuesday relaying the details of Zack’s situation at Siena, I knew I had to reach out to him and do what I could to come to some kind of defense for him.

Why? Because there are thousands of Zack’s out there on college campuses who are scrutinized for their beliefs.

As Campus Reform reported, Zachary Butler, a junior studying political science, is under investigation after posting 600 flyers on campus relaying the details of Professor Jenn McErlean’s March 20 e-mail. In her e-mail, McErlean reportedly announced that she had quit the school’s committee on civil discourse because the thought of working with conservative students was “making me miserable.” Though Butler was not involved in the initial email chain, he told Campus Reform that the school’s lack of response to this incident—and the broader climate of hostility against conservative students—deeply concerned him.

“So in order to keep the dialogue going, I took it upon myself—with the help of a friend—to post 600 copies of that email all over campus,” Butler told the online publication, adding that all 600 flyers were posted overnight on March 22nd.

Eleven days later, on April 2nd, Butler was served a “Notice of Charges” that claimed his flyer-posting efforts have “adversely [affected] the health, welfare, and/or safety” of campus community members “or the name and/or reputation of the College,” and that he also violated the school’s posting policy.

Really? “Affecting the health, welfare and safety of the campus community?”

The only individuals negatively affecting the campus community, from what I can gather, are the intolerant academics and administrators, the “adults,” who frankly should be ashamed of themselves for contributing to a hostile environment for students who don’t share their worldview. The administration more than shares the blame for persecuting Zack.

I call upon Siena College to drop this bogus charge against Zack Butler; Zack was fighting for his beliefs which is his right, and we should all be proud of Zack for being a leader and a voice even we don’t at agree with him. Zack is a voice for that conservative student who is scared to speak up in class due to fear of being attacked by their teacher and classmates.

Whether you are a conservative, liberal or moderate; we should all realize the rhetoric on our college campuses is not a free speech inclusive one. We must all unite against these forces that want to impede free speech. We must all speak up, so people like Zack are not fighting this battle alone. The time is now; we must confront this troubling trend before it is too late for the American College, for its youth. We must all hold on to our beliefs because what are we without them?