Did this College Democrat just admit that Obama (and his N.J. allies) can’t run an economy? 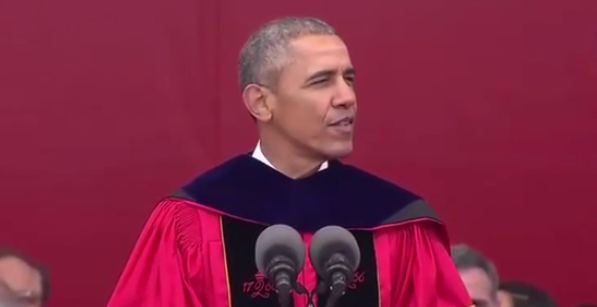 Republican U.S. Senate candidate Bob Hugin was only “telling the time of day” this past Sunday with the following tweet, Save Jerseyans:

It's graduation day at Rutgers! Parents, time to dust off the couch in the basement. New Jersey has the highest rate of 18-34 year olds living with their parents. As a proven job creator, I will work to bring more jobs back to New Jersey. #NJSen pic.twitter.com/2VRR5fWwmh

“It’s graduation day at Rutgers! Parents, time to dust off the couch in the basement. New Jersey has the highest rate of 18-34 year olds living with their parents. As a proven job creator, I will work to bring more jobs back to New Jersey.”

We talked about this last week, contemporaneously with (1) Phil Murphy extending subsidized student aid to illegal aliens and (2) the Democrat Governor’s acting education secretary admitted that goofing off and flunking out of community college wouldn’t result in a taxpayer reimbursement under the Murphy Administration’s new “free” college plan which, by the way, excludes Middle Class kids.

College kids can’t afford New Jersey assuming, of course, they graduate with a degree that is actually economically viable. NJ 101.5 recently reported how “New Jersey had the biggest outmigration of college students in the nation – a net loss of 29,000 students, with the departure of nearly 35,000 high school graduates offset by the gain of less than 6,000 students enrolling from out of state” in 2014.

The problem is especially acute in New Jersey but, nationally, and especially in the final days of the Obama Administration’s historically stagnate economy, millennial unemployment spiked.

The statistics verify the frightening extent to which millennials are fleeing New Jersey, and Phil Murphy is working overtime to give them more reasons to run.

Too many New Jersey graduates are sleeping on their parents’ couches assuming, if they’re living in New Jersey, they don’t move to North Carolina or Pennsylvania to an out-of-state friend’s couch.

As is often the case in these crazy times of ours?

The truth triggered a batch of young liberals.

“Young people do not choose to work multiple part-time jobs or live at home. They are forced to by an economy that has taken advantage of new workers for a decade and a housing market that is unaffordable,” said New Jersey College Democrats chair Megan Coyne (h/t New Jersey Globe). “Bob Hugin’s lack of understanding of the causes of our problems, or the role that bankers, like him, played in it, is troubling.” [Emphasis added.]

“Young people are not political props or an inconvenience to their parents,” Coyne added.  “Bob Hugin should apologize to the graduates of the Class of 2018.”

Oh, where to begin?!

How about this: “banker”? Did she forget that Phil Murphy (D-Goldman Sachs) is her party’s top guy? Someone is off script…

But that’s only the tip of the iceberg. During the “decade” (2009 through 2018) which Coyne cited in her quote to David Wildstein’s website, Barack Obama was the head of our federal government and New Jersey Democrats continued their hegemonic control of the New Jersey legislature. Obama and his allies in New Jersey thwarted tax reform, regulation cuts, and other job-generating measures. The cumulative result was record under-employment for young and old alike. In 2014? The same year as the above-referenced data concerning millennials fleeing New Jersey? Youth unemployment in Barack Obama’s 6th year in office hit 15.8%.

Now, with Phil Murphy at the reins? The dismal Obama economic legacy is alive and well in New Jersey (notwithstanding President Trump’s best efforts to dismantle it at the federal/national level). The results are foregone conclusion. The rules of mathematics don’t stop at the New Jersey state line.

Professor Rooney of Save Jersey University would like to impart some knowledge upon triggered young Democrats:

The real world is ultimately governed by reality. Talented bullshit artists can manipulate events or skate by with minimal effort for awhile, but the reckoning is never far behind. Adults — armed with college degrees and substantial financial obligations — are ill-served by a strategy which repudiates these truths for the sake of avoiding or staving off emotional distress.

If the New Jersey College Democrats have a problem with the job market of the last decade?

And the Rutgers Class of 2018 wants to get to work?

Don’t take it out on Bob Hugin. He was busy creating jobs and fighting cancer.

Concerned College Democrats should take a deep breath, do some independent research, and channel their energies into asking their College Republican classmates for some advice on making healthier choices in the voting booth. You’ll thank me later. So will your parents.