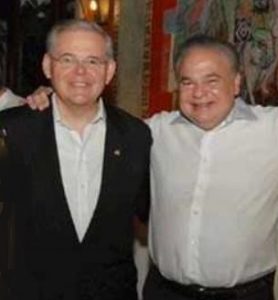 MOUNTAINSIDE, N.J. — The worst criminal in the history of U.S. medicare fraud happens to be Senator Bob Menendez’s good buddy.

Today, that criminal (Salomon Melgen) was denied bail and a new trial as he awaits the outcome of an appeal.

“The Court finds that Defendant has not demonstrated, by clear and convincing evidence, that he is not a flight risk,” U.S. District Court Judge Kenneth Marra wrote. “Although Defendant complied with the conditions of pretrial release before the verdict was rendered, circumstances have changed significantly with his conviction. In view of the length of Defendant’s sentence and his age, there is great incentive for Defendant to flee.”

The former Florida eye doctor and mega-Menendez donor was sentenced to 17 years in jail following his conviction for perpetrating a $73 million Medicare fraud.

The campaign of Republican challenge Bob Hugin seized on Monday’s development to highlight the objectively seedy Menendez’s relationship with Melgen; specifically, Hugin’s team cited Menendez’s ‘severe admonition’ by a bipartisan Senate committee for accepting $1 million worth of improper gifts from Melgen. Menendez helped Melgen plenty, too, using his power and influence not just on the business front but even to obtain a visa for Melgen’s model mistress.

Menendez narrowly escaped conviction (via a mistrial) when federal prosecutors tried to categorize these gifts as bribes. Melgen wasn’t so lucky.

“We applaud Judge Marra’s decision to ensure that Sal Melgen is held accountable for his crimes,” said Hugin Communications Director Megan Piwowarin a statement. “Now it’s time for Bob Menendez to be held accountable, too. Menendez violated federal law by taking $1 million in illegal gifts and abused his office to intervene in the Obama Justice Department’s investigation into Melgen’s Medicare fraud scheme. Menendez is refusing to amend his financial disclosure and pay back Melgen’s dirty money as ordered by the bipartisan Senate Ethics Committee. When is Menendez going to comply? It’s time for him to come clean and pay up.”