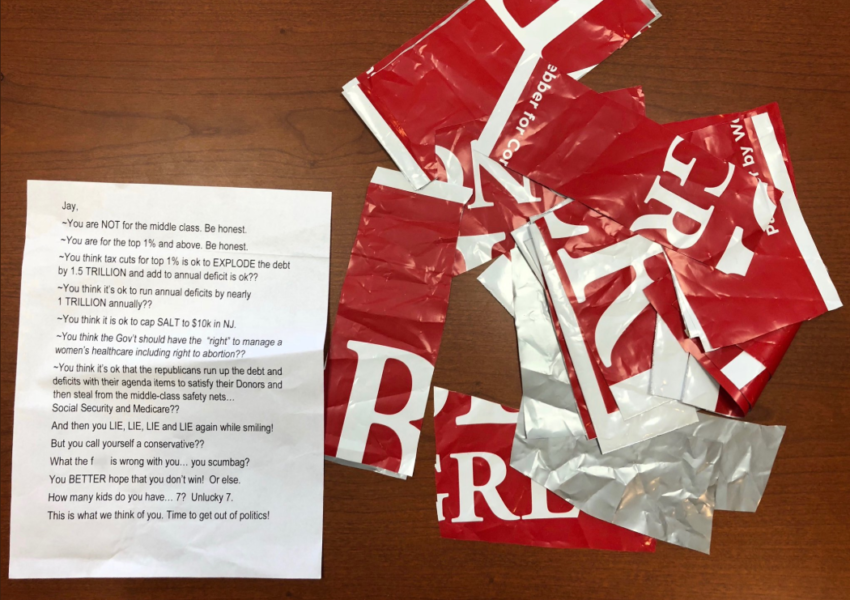 MORRIS PLAINS, N.J. — The NJ-11 House race took a turn for the ugly on Wednesday.

The campaign of Republican Jay Webber reported receiving an anonymous letter (accompanied by a ripped up lawn sign) which didn’t just accuse the Assemblyman of being wrong on policy points but also included an ominous comment about his seven children.

“What the fuck is wrong with you… you scumbag? You BETTER hope that you don’t win! Or else. How many kids do you have… 7? Unluck 7. This is what we think of you. Time to get out of politics,” the anonymous author wrote.

Criticizing a candidate on the issues is part of politics. Threatening my children is not. We are thankful for the support of law enforcement as we work to find whoever is behind this gutless act. We will not be intimidated as we work to make #NJ11 better for everyone. pic.twitter.com/nmVRuV9ATH

Sadly, this isn’t the first time that Webber’s children have been brought up during the course of the campaign.

Back in May during the primary phase, State Senate Nellie Pou (D-35) took direct aim at Webber’s four daughters, declaring that Webber’s vote against a fake ‘equal pay’ bill was “yet another sign of the grossly distorted worldview that Webber has deliberately tried to make a reality despite the truly cruel and vicious effect that his voting record and rhetoric has had on not just his four daughters but every woman throughout the state of New Jersey.”