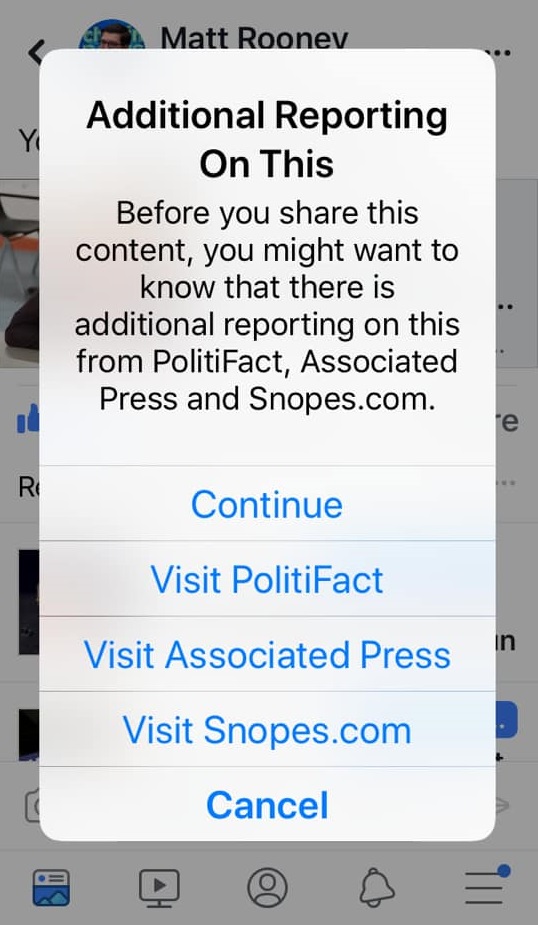 Fake news abounds these days, Save Jerseyans, but who should decide what’s the truth?

You? Or the elitist tech overlords?

Facebook (in the midst of a crusade to clamp down on alleged offenders) has apparently decided to single out Save Jersey as a news source in need of fact checking; earlier Monday, one of our readers received this prompt when attempting to share our story on Congressman-elect Andy Kim (D, NJ-03) and Congresswoman-elect Mikie Sherrill (D, NJ-11) potentially breaking their respective promises to oppose a Pelosi speakership:

Hmm. I wonder if any of the Star-Ledger’s or establishment state media’s “news” stories trigger this pop up warning? Somehow I doubt it.

I’m not surprised to find the editorializing lefties at Snopes or liberal AP being offered up by Facebook as acceptable alternatives either.

The fact that it happened with this post is particularly interesting to me since the post does little more than report a story published by The Hill, a national, respected, establishment media source.

For what it’s worth: the website MediaBiasFactCheck.com apparently analyzed Save Jersey and concluded that we provide proper sourcing and “have never failed a fact check” notwithstanding our out-in-the-open conservative orientation which we never hide. We say so, right below our logo! Which is more than most of the establishment, left-leaning sites can say.

Let us know if you’ve seen a similar prompt when trying to share Save Jersey posts.