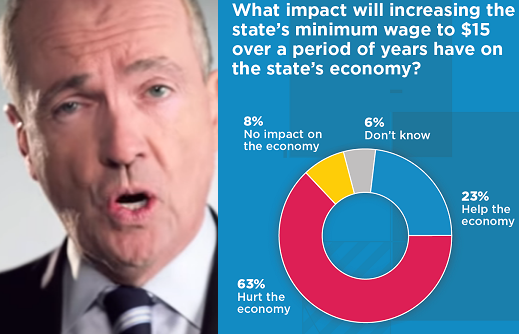 TRENTON, N.J. — Phil Murphy didn’t achieve the $15 minimum wage he wanted in 2018. In fact, he’s still at loggerheads with legislative Democrats over it, a fight which is certain to be renewed in 2019.

A new survey conducted by the New Jersey Society of CPAs (NJCPA) (and released just before Christmas) found 63% of 1,204 polled New Jersey certified public accountants (CPAs) opposed to raising New Jersey’s minimum wage to $15 even if it was done gradually…

“Raising the minimum wage will have an inflationary impact, causing ripple effects which will impact consumers, and ultimately drive businesses out of New Jersey, said respondents. As one commented, raising the minimum wage is “nothing more than a short-term stop gap…It’s a false front for the politicians, not a true economic creator or benefit.”

Any wage hike should also be indexed to reflect the difference in cost of living in various New Jersey communities, according to respondents. Several cited the need for the wages to remain below $15, though increased from its current level, as it is a minimum wage designed for entry-level workers and not a living wage to support a family.”