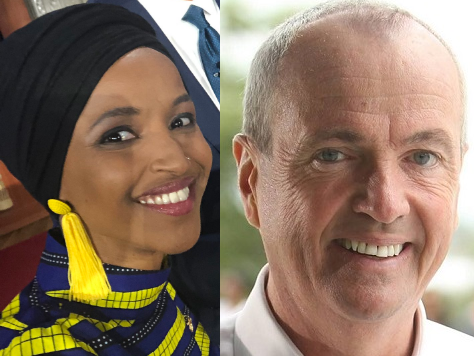 PATERSON, N.J. – Minnesota Democrat Congresswoman Ilhan Omar, infamous for her anti-Semitic commentary, is weathering withering criticism this week from colleagues, pundits, and victims’ families alike after dismissing the 9/11 attacks as “some people did something.”

New Jersey Governor Phil Murphy visited the Islamic Center of Passaic County in Paterson this week and refused to condemn Omar according to a report by NJ.com’s Matt Arco:

“I don’t agree with everything she says and I don’t agree, in every case, how she says it,” Murphy said in response to a question about Minnesota Democratic U.S. Rep. Ilhan Omar, who says she’s faced death threats since Trump tweeted a video that purports to show her being dismissive of the 2001 terrorist attacks.

“But this is America,” the governor said. “She has a right to say that and we have a right to debate that without impairing anybody’s personal safety.”

It did not appear that Murphy clarified which specific Omar comments he didn’t “agree with” or why it would be “despicable” for any American to criticize a federal legislator for trivializing 9/11.

Murphy is no stranger to over-heated rhetoric where the President is concerned, comparing Trump and his supporters to Nazis on more than one occasion.

The Murphy Administration’s own record on tolerance is less-than-impressive. Last fall, an aide of the Governor was suspended and sent to sensitivity training after Save Jersey unearthed multiple anti-evangelical Christian social media postings.