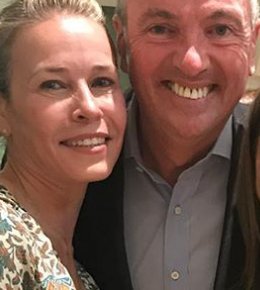 The Livingston native fund raised for Phil Murphy in 2017. She tweeted in support of his first budget in 2018. She even attacked Menendez opponent Bob Hugin later that same year.

She’s certainly entitled to her opinions, half-baked though they might be.

You and I are equally entitled to question whether someone as screwed up in the head as Chandler is worth listening to.

Handler visited “Real Time with Bill Maher” on Friday and admitted to suffering a “midlife identity crisis” after Donald Trump’s 2016 upset victory. She also claimed Trump’s win “led” her to weed which she described as a “gateway drug to meditation.”

Handler’s own words: she felt “so unhinged.”

“I had to pay a psychiatrist to listen to me bitch about Donald Trump for about the first three weeks,” Handler told Maher. “And then once when we got past that and got to the real stuff, I realized the parallel there was my world becoming unhinged when I was a little girl, my brother died when I was nine years old. I had never related the two, but for me, as I can imagine it must have been for so many people, it was an emotional trigger of everything being destabilized and I realized how spoiled and privileged I had been all my life and realize to be this upset and this on-a-ten every day and the outrage and the anger, I just wanted to f-cking fight people, you know? And I was like, ‘I have to go see a psychiatrist.’”

Here’s the video if you want to hear it for yourself. It actually got weirder from there with Handler waxing on about ‘white guilt’ and more guilt for having no “right to be in pain” since she had never been raped or molested.

Look: I wasn’t a fan of Barack Obama. Shocking, I know!

Life goes on. The sun comes up and, for sane people, there are plenty of other things going on to keep disappointments in perspective.

Handler’s apparent mental issues and guilt complexes (plural) are the opposite of comedy when you think about it. Comedy is the art of finding humor even in all things, including the darkness that sometimes creeps into everyone’s lives. Comedy is perspective. It’s a tonic.

If you’re this wrapped up in anything other than your family? Such that a single election can send you into a personal tailspin?

Then you should probably spend more time working on yourself than telling other people how to vote.

I’m not joking: I hope this woman gets the help she needs. Her challenges are beyond anything that an election result can solve.