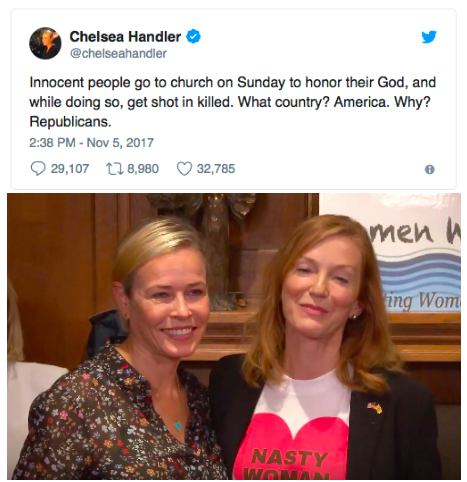 When failed Netflix comedian Chelsea Handler rode into New Jersey to fund raise for Phil Murphy, Save Jerseyans, I pointed out how it was an appropriate albeit unflattering choice for the Democrat gubernatorial nominee.

She’s a nasty, arrogant, far-left goofball with more opinions than common sense who in NO WAY reflects the value and lifestyle of average New Jerseyans… kind of like her candidate!

Not a good look at all.

Then Handler shocked even some of her fellow gun control advocates (no small feat) by taking it to a whole new level.

“Innocent people go to church on Sunday to honor their God, and while doing so, get shot in killed. What country? America. Why? Republicans,” the former ‘Chelsea’ host wrote in the wake of this weekend’s horrific Texas Church shooting.

Innocent people go to church on Sunday to honor their God, and while doing so, get shot in killed. What country? America. Why? Republicans.

Dark hearted stuff, right? Regardless of how you feel about the Second Amendment

Apparently this guy was an atheist. Are all of Chelsea’s godless Hollywood pals evil, too? It’s shaky logic to say the least, but we trust it’s all decidedly over her head. She’s emoting. A not-to-be-take-seriously tinsel town twit.

One Republican legislator seeking re-election on Tuesday seized on Handler’s nonsense to make a point about her own opponent.

“Last week, Chelsea Handler raised money in New Jersey on behalf of several Democrat candidates, including my opponent Lacey Rzeszowski,” said Assemblywoman Nancy Munoz of Union County, apparently referring to a recent ‘BlueWave’ event headlined by Handler. ‘Before we even knew the details of what had happened, Chelsea Handler inexcusably blamed Republicans for the horrendous church shootings in Texas.  This type of partisan posturing and divisive rhetoric is exactly what is wrong with politics today. I call on my opponent to return the money she received from Chelsea Handler and denounce this inciteful language.”

All true. And I’ll go one step further: what’s REALLY wrong with politics today is that wackos like Phil Murphy and Chelsea Handler are no longer outliers in the Democrat Party’s upper echelons of power notwithstanding their increasing detachment from the struggles and dreams of average people.

Unfortunately, if Phil Murphy prevails on Tuesday, Handler’s wacky worldview will be par for the course in the Governor’s office for at least the next four years. It’s no laughing matter.