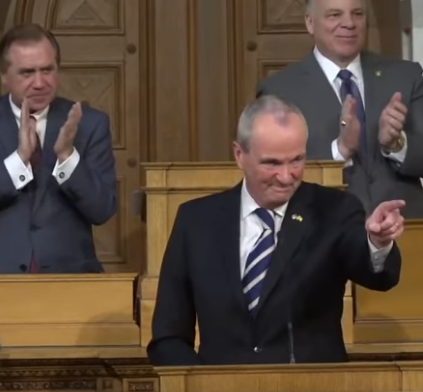 After months of falling short? New Jersey’s tax revenue surged in April, Save Jerseyans, and the Murphy Administration has an unlikely hero to thank.

“For the second year in a row, the Governor is proposing to ask a little more from the most fortunate among us who have reaped enormous dividends from a bullish economy and lavish federal tax cuts so that the working and middle class families of this state can finally get a fair shake,” Treasurer Elizabeth Muoio declared on Tuesday during her testimony before the legislature; we had just learned that the state raked in record income tax revenue in April 2019 after months of alarmingly weak numbers.

Murphy naturally wants MORE tax hikes to justify MORE spending contained in his FY 2020 budget proposal. That should surprise no one! He’s a boorishly reliable leftist.

The REAL story here is that the Murphy Administration had to REPEATEDLY admit this week that the Trump tax cuts are helping New Jersey. Click here to read Muoio’s full testimony.

“We do know that growth is being driven by a combination of factors, chief among them: the 2.5 percent state CBT surtax on earnings over $1 million and expansion of the tax base due to federal tax law changes,” Muoio added.

Back to that CBT point in a minute.

Economic growth = tax revenue growth; H&R Block already reported that New Jerseyans saw a decrease in their federal income tax liability despite Democrats’ insistence to the contrary. Coupled with a robust economy? Or “bullish,” to use Muoio’s word? New Jersey are making more and therefore PAYING more to Trenton.

The question then becomes: why in God’s name would a SANE, non-ideologue pursue the opposite policies (raising taxes for example) pursued by the Trump Administration which are clearly working?

Is the CBT hike really adding to the economy-fueled revenue growth?

Or canceling out some of its benefits?

“Driven by significant tax cuts at the federal level in 2017, the federal government has been reporting a booming national economy and job market that has left New Jersey behind. New Jersey’s tax and spend policies have stifled our economy and grown our government. Governor Murphy and the legislature need to recognize and appreciate the commitment of our beleaguered taxpayers…both individuals and corporate,” countered Regina M. Egea, president of the Garden State Initiative (GSI).

The rest of Egea’s take is worth internalizing:

“Rather than holding taxpayers hostage and only offering “a new, stand-alone, one-year program……through a refundable tax credit”, let’s provide real tax structural reductions.  They could begin by accelerating the sunset of last year’s corporate business tax surcharge so we don’t stand alone at 11.5% in 2020.  Or consider not having a top individual rate that is double Massachusetts and more than triple Pennsylvania. NJ has an opportunity to get on the more competitive track by limiting government spending and investing in what grows our economy not grows our government burden even further.