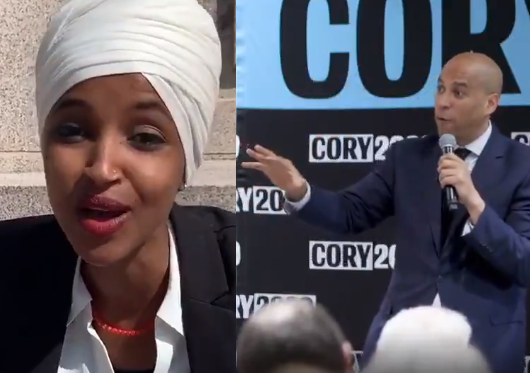 WASHINGTON, D.C. – If it’s fair to judge a man by the company he keeps? Cory Booker’s character is more questionable than ever before.

The failing Democrat presidential candidate is teaming up with notorious anti-Semite Ilhan Omar (D-Minnesota) to pass the ‘Federal Jobs Guarantee Development Act.’ The program would provide government-subsidized jobs and expensive benefits – including paid sick and family leave – for the duration of a three-year trial period.

Omar visited CNN on Monday to tout the program’s alleged benefits, but she was less open about the challenged presented by the program’s tremendous cost to taxpayers.

“It would create a pilot program to guarantee jobs for anyone that wants one. That’s ambitious. It would cost a lot of money,” CNN anchor Erin Burnett asked Omar. “What is the number one thing you would do to pay for that?”

“This is a idea that was a long legacy,” Omar deflected. “It was proposed by Franklin Roosevelt. It was supported by Martin Luther King, Jr. It’s going to allow, it’s a… pilot program that is going to allow 15 communities within this country to create this program and I think ultimately when these jobs are created and people are placed in these jobs, it will pay for itself.”

Watson-Coleman’s decision to work with Omar is particularly revealing since she was forced to condemn Democrat officials in her own backyard – just this week – who recently made vile anti-Semitic remarks.

Rep. Omar’s history of anti-Semitic comments and alliances may also overshadow the substance of Booker’s proposal in the weeks and months ahead and could prove problematic for New Jersey’s junior U.S. Senator as he strives to land on the 2020 Democrat national ticket.