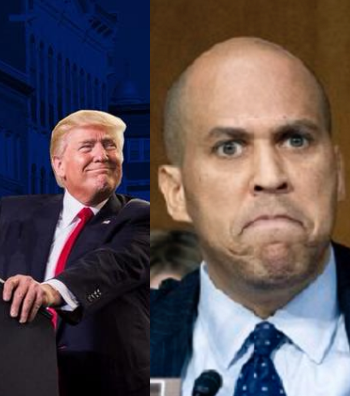 The U.S. just took out Iran’s most powerful and notorious military commander, Save Jerseyans, one who was a notorious supporter of terrorism and long-time American foe. Things are heating up (again) after a series of Iranian transgressions which, until now, went unaddressed outside of economic sanctions.

Guess who has a strong opinion about Donald Trump’s handling of this latest Middle Eastern crisis?

“This is not something that should be done on impulse,” Booker said, referring to Qasem Soleimani’s killing at Baghdad airport in neighboring Iraq. “It should be done in a larger strategic vision and understanding what the consequences could be in taking out this significant—assassinating someone of such a significant leadership role in Iran.’

We have a president who has no strategic plan when it comes to Iran and has only made that region less stable and less safe. More thoughts: pic.twitter.com/Cn25X4kOhQ

Interestingly? Unlike the rest of the Democrat field, Booker raised eyebrows back in June by saying he wouldn’t necessarily rejoin the Obama “Iran Deal” where he sitting in the Oval Office.

“If I have an opportunity to leverage a better deal, then I’m going to do it,” Booker said, who had also previously criticized Trump for LEAVING the deal behind.

What Booker hasn’t expounded upon: HIS OWN PLAN. Or lack thereof?

What would Spartacus do?

We don’t know. He hasn’t said. It’s a very Cory type of move! Bitch bitch bitch but fail to offer a meaningful, substantive, details counter-proposal. It’s little wonder why his polling position in the early states remains in the basement (he’s likely to miss the Iowa debate stage because of his terrible numbers).

The man Booker would like to replace has been nothing if not consistent:

To Iranian President Rouhani: NEVER, EVER THREATEN THE UNITED STATES AGAIN OR YOU WILL SUFFER CONSEQUENCES THE LIKES OF WHICH FEW THROUGHOUT HISTORY HAVE EVER SUFFERED BEFORE. WE ARE NO LONGER A COUNTRY THAT WILL STAND FOR YOUR DEMENTED WORDS OF VIOLENCE & DEATH. BE CAUTIOUS!

Attack a U.S. embassy? You die.

President Trump’s message isn’t hard to misunderstand! Measured. A clear signal to allies and foes alike that there are consequences to crossing the world’s greatest republic.

Anyone anywhere who can’t appreciate that painfully simple logic needs a CT scan. Booker – who has a history of making up imaginary friends (h/t T-Bone) – is long overdue for professional mental health intervention.