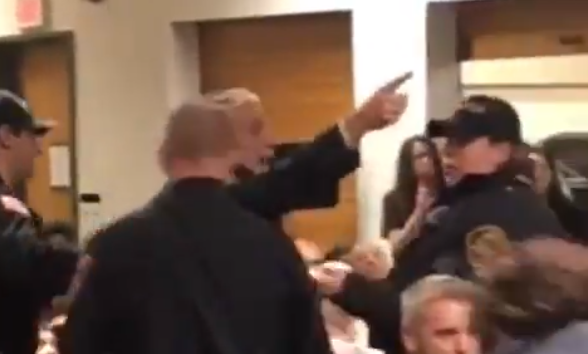 NEW BRUNSWICK, N.J. – A former Democratic New York State Assemblyman says he was ejected from a “Muslims for Peace” event at  Rutgers University this past weekend.

Rutgers has a long history of hosting radical Leftists while excluding conservatives.

Dov Hikind tweeted about the encounter after his removal from the venue; according to the former lawmaker, he intended confront notorious anti-Semite Rep. Rashida Tlaib of Michigan over her most recent incendiary comments, this time concerning the death of a Palestinian child.

The video is embedded below:

Police just ejected me from an event of @Muslims4Peace at @RutgersU which was a fine event until @RashidaTlaib showed up. I challenged her about her antisemitism and spreading of an anti-Jewish blood libel! She had no answer for me.

They will never silence us!

This was the event: https://t.co/VCjhGyv0Wn

After challenging @RashidaTlaib over her shameless antisemitism, and her recent spreading of an anti-Jewish blood libel, I got ejected.

Rashida had no response for me, but @AmericansAA showed that we will never be silenced or intimidated! pic.twitter.com/ZRzZuHGPNh