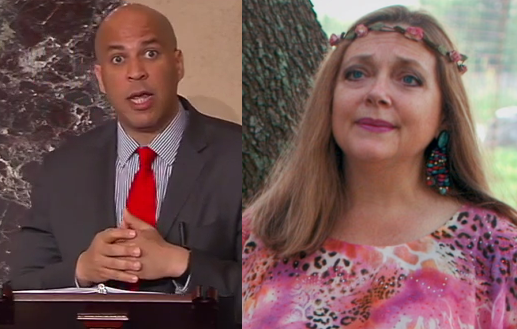 I’ll keep the spoilers to a minimum. It’s a story revolving around three colorful characters: a man named “Joe Exotic,” another man whose real name is Jack Donald “Don” Lewis (missing since 1997), and Lewis’s wife at the time of the documentary: an animal rights activist named Carole Baskin. The series is NUTS – I won’t spoil the details for you – but it suffices to say for our purposes that Joe Exotic and some other figures in this sordid tale have alleged or insinuated that Baskin played a role in Lewis’s disappearance. She denies it, by the way.

And guess what… she’s a Booker donor!

She gave $1,000 to Spartacus’s ill-fated 2020 presidential campaign. Maybe she was attracted to Booker’s views on animal rights and veganism?

Baskin has given to a few other well-known pols, too. Here’s the FEC info: