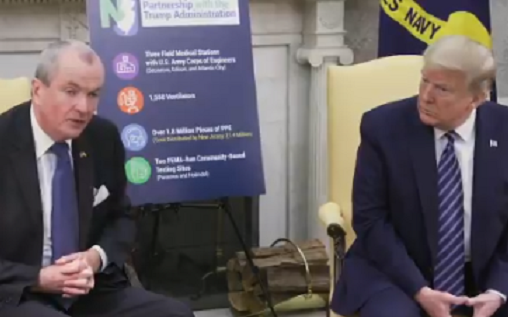 CAMDEN, N.J. – The Murphy Administration is once again embroiled in a legal showdown with Donald Trump, and this time his campaign specifically.

The Trump campaign’s lawsuit – first reported by Reuters (click here) – challenges Murphy’s controversial “Executive Order 177” which automatically mails a ballot to all New Jersey registered voters and bars anyone except for the disabled from voting at an actual machine.

The legal theory behind the complaint for declaratory and injunctive relief attacks the legal basis for the order: in ordering a remote general election, Trump’s lawyers reason, Murphy unconstitutionally usurped authority reserved to the state legislature. The campaign is arguing that Murphy violated both the Elections Clause, Electors Clause, and 14th Amendment of the U.S. Constitution.

Both sides of the litigation believe the other is stepping over the line.

“In a direct usurpation of the legislature’s authority, Gov. Murphy issued Executive Order 177 […] purporting to rewrite the election code for the November 2020 election,” the suit alleges, attacking Murphy’s order as a “brazen power grab.”

“Let me be clear: Vote by mail in this election will keep people safe, period,” a visibly irritated Murphyresponded at his Wednesday daily COVID-19 press conference. “The Trump campaign is embarking on a brazen attempt to sow fear and confusion to delegitimize our elections and cast doubt on our democratic process.”

Notwithstanding his insistance that remote elections are unsafe, the Murphy Administration continues to enforce its prohibitions against social distancing non-compliant situations unevenly.

New Jersey is not a presidential battleground state. However, Republicans are defending recently-converted Republican Jeff Van Drew’s NJ-02 house seat from a member of the Kennedy clan as well as attempting to win back at least one of four other seats – NJ-03, NJ-07, NJ-05 and NJ-11 – captured by Democrats over the past four years.