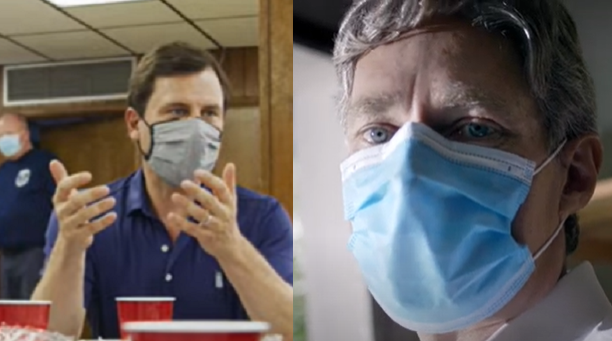 WESTFIELD, N.J. – In NJ-07, the early TV air war is a battle over which candidate is less partisan.

Both first-term incumbent Democrat Tom Malinowski and Republican challenger Tom Malinowksi this week launched their first campaign ads of the season. Malinowski’s artsy ad (click here) dropped Monday features the Congressman sitting (and pacing) in a garage while holding a mask and complaining “some people just want to divide us.” Malinowski also attacked what he insisted was a “disastrous” federal response to COVID-19.

Kean’s ad is the least aggressive of the two. Released Wednesday, Kean is shown in a library/living room discussing the present “difficult times,” his history of bipartisanship, and “too many politicians” who “only care about themselves.” He doesn’t specify who the self-absorbed politicians are but it isn’t a reach to guess that Malinowski is one of them.

Both men made a point of incorporating masks into their ads. Both wore them at varying points.

Both candidates are also more ideological than their ads suggest.

Kean, who is the state Senate’s top Republican, is definitely the most moderate or mainstream (if you prefer) of the two but he nevertheless earned a American Conservative Union (ACU) designation for ‘conservative achievement’ in 2015. He’s a centrist by 2020 standards but decidedly conservative if you’re using a pre-1990s yardstick.

Malinowski on the other hand is far, far left on everything from taxes and immigration to health care and abortion. He’s also an objectively nasty guy; back in the spring as the United States’s COVID-19 pandemic was in its early days, Malinowski joked about withholding disinfectent from Kentucky as a way of punishing Mitch McConnell. Divisive? Um, yeah! I’d say so. The incumbent should take some of his own advice, don’t you think? Ultimately, future Kean ads will need to talk about Malinowski’s far-left orientation if TK2 hopes to create a winning contrast for voters. I suspect you’ll see just that.