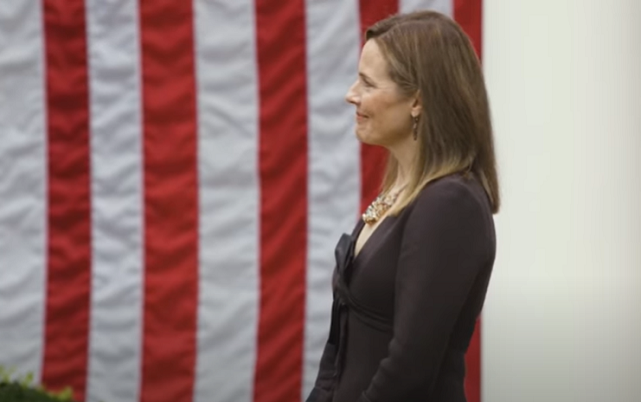 Some conservatives view the (likely) confirmation of Amy Coney Barrett as an ideological coup de grâce in its decades long battle to gain control of the U.S. Supreme Court. Plenty of Leftists obviously feel that way, too, and you’re going to see plenty of wild rhetoric and Spartacus-like behavior as confirmation hearings begin next month. I’d take a news vacation if I could get away with it! But I can’t, so here we are.

You didn’t need me to tell you any of that. What you might not know or fully appreciate – because most of you reading this aren’t Leftists, and therefore don’t think like Leftists – is how this one runs so, so much deeper than who controls the court until the next vacancy or vacancy once again plunges the nation’s amatuer social media con law experts’ into emotional turmoil.

They hated Scalia because he was a conservative.

They REALLY hated Thomas because he was a black conservative.

They hated Kavanaugh because he represented “the patriarchy.”

Barrett is even more dangerous for the Left than Thomas because she is a highly-successful religious conservative woman.

Democrats’ suburban gains in recent years have been driven by youngish, college educated women who’ve been brainwashed by the culture and their professors into holding two ideas in absolute: (1) America – especially corporate America – is fundamentally sexist, and (2) the right to kill one’s young (abortion) the lynchpin of professional, legal, and societal improvement in the condition of modern American women.

Barrett threatens to shatter that worldview and upend the gender politics applecart.

We’ve had four women on the U.S. Supreme Court (two still sitting). Interestingly, the two still on the Court – Kagan and Sotomayor – are unmarried and childless attorneys-turned-judges and also solid liberal votes on most issues. I’m not suggesting there is anything wrong with being single or not having children (in fact, as a family law attorney by trade, I sometimes wish more people would make a mature decision about whether they’re a good fit for parenting). It’s nevertheless noteworthy that Judge Barrett would bring a unique female perspective to the highest court in the land.

An attorney and now federal judge with impeccable academic and professional credentials, Barrett is about to become the most powerful woman in Washington – on a court likely to still have a fair number of 5-4 decisions – all while actively raising SEVEN children. Two are adopted; one was adopted in the aftermath of the nightmarish 2010 Haiti earthquake. Even her liberal colleagues acknowledge that Barrett is as formidable a legal mind as exists in the United States today. I suspect her devout Catholicism, something which bigoted Leftists are currently trying to turn into a confirmation issue, probably helps her get through the long nights of briefing while simultaneously making sure her large family is also happy, healthy, and chugging along.

THIS IS NOT HOW FEMINISM IS SUPPOSED TO WORK, Save Jerseyans!

Religion, and husbands, and children are supposed to hold women back! True feminists (the Left believes) succeed at the highest level – and achieve maximum freedom – by throwing off the shackles of these traditional, patriarchal, antiquated institutions. Abortion is the ultimate sacrament of this secular religion because it gives women the ability to make sure children in particular are never an impediment.

The pro-life Barrett proves definitively that that’s always been a load of horseshit.

Men and women are strengthened by their families, not weakened.

Men and women are empowered by their faith, not enslaved.

Children invigorate the soul and give life a purpose, not limit its potential.

Yes, my friends: Amy Coney Barrett has the potential to dramatically transform this country, but her ability to make waves extends well-beyond the decisions she’s likely to render as an associate justice. She may disrupt contemporary feminism as we know it forever. I’m excited to see what she does on the bench. I’m more excited to see this nation’s young women gain a role model worthy of their birthright – and responsibility – as free Americans.