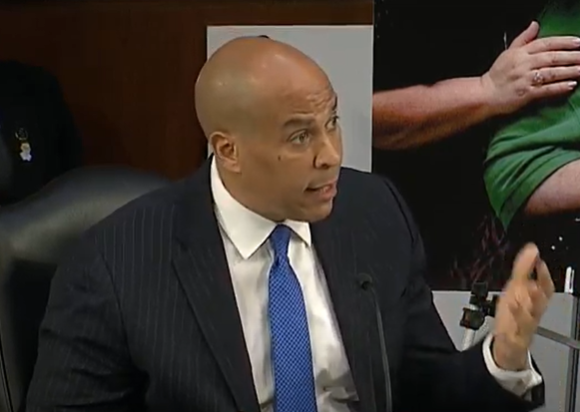 WASHINGTON, D.C. – Cory Booker made such a giant ass out of himself during the Kavanaugh hearings that he earned a rare rebuke from Clarence Thomas (who is known for using his words sparingly).

Monday’s much-anticipated return of “Spartacus” – this time at Day #1 of Amy Coney Barrett’s confirmation hearings – did not disappoint. Although I do have to say, Save Jerseyans: the original Kavanaugh performance were a little bit more energetic! I think the lack of an end goal in mind (becoming president or vice president) probably zapped some of the juice from everyone favorite Twitter senator.

What did Booker say?

Good luck following it. He bitched about COVID-19, whined about preexisting conditions, showed some giant blow-up photos of folks grapplign with health care challenges, and then found a way to work abortion in there, too. About the only thing that isn’t part of the grand alleged ACB-GOP plot to subvert the republic is… that Gulf oil spill from several years ago? He might’ve worked that in, too, given more time.

“Nothing about this is normal,” said Booker. “It is not normal that Senate Republicans are rushing through a confirmation hearing, violating their own statements and betraying the trust of the American people and their colleagues, and failing to take in this hearing even the most basic safety protections for the people around them.”

“I will not be voting to confirm Judge Barrett’s nomination,” Booker then concluded at the end of a long rant on the ACA and abortion, all before Judge Barrett had a chance to say ANYTHING concerning her qualifications or her jurisprudence.

His history is obviously off, and it’s an all-the-more ridiculous position to take when your side is actively try to PACK THE SUPREME COURT!

Booker deservedly got roasted on Twitter for being a total clown. He also earned a rebuke from his 2020 U.S. Senate election opponent.

“Cory Booker won’t even listen to Amy Coney Barrett and has pledged to vote NO on her confirmation before even letting her speak a single word,” tweeted Rik Mehta, the NJGOP’s nominee. “Booker is one of the most vile perpetrators of partisanship in Senate, he is an embarrassment to New Jersey and our nation.”