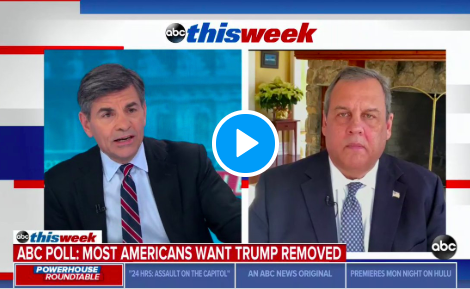 WASHINGTON, D.C. – Chris Christie completed his political break with President Donald Trump on Sunday’s This Week program by announcing his support for impeachment.

The former governor – who helped the Republican President with his Election 2020 debate prep – said Trump had committed an impeachable offense which led to last week’s Capitol Hill riot.

“If inciting to insurrection isn’t, then I don’t really know what is,” said Christie.

Chris Christie tells @GStephanopoulos Trump’s incitement of Capitol siege is an impeachable offense: “If inciting to insurrection isn’t, then I don’t really know what is.” https://t.co/OrkLsXeQjx pic.twitter.com/55sWETisCd