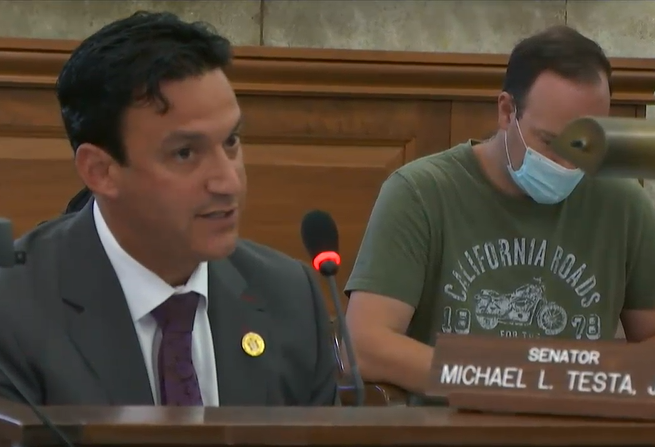 Mike Testa Jr. – one of the NJGOP’s most conservative legislators – is up by 13-points in his first bid for reelection according to a new Stockton University poll released Wednesday.

State Senator Testa is reportedly ahead of his Democrat challenger by a whopping 13-points. We always take Stockton polls with a grain of salt. Stockton predicted a 14-point Testa LOSS in 2019 before the Vineland attorney went on to win by 7-points, making the seat red for the first time since January 2008 when then-Democrat Jeff Van Drew emerged victorious. Testa’s incumbent Assembly running mates are also leading their Democrat opponents in the Republican-leaning and sprawling South Jersey district that includes many of the state’s iconic Jersey Shore resorts like Ocean City and Wildwood.

Meanwhile, in the same district, Phil Murphy allegedly trails Jack Ciattarelli by 2-points (46% to 44%) which is inside of the poll’s margin of error.

That’s not great news for Ciattarelli with just three weeks left to go (assuming, of course, that the poll is accurate); to win statewide, he wouldn’t necessarily need to carry LD1 by 13-points but he would need to lead Murphy by a much more solid margin than a couple of points to compensate for losses in populous blue North Jersey counties.

You can examine the polling report for yourself here.

FYI: The survey was conducted over a broad span of time – September 28th to October 10th – prior to the second debate.