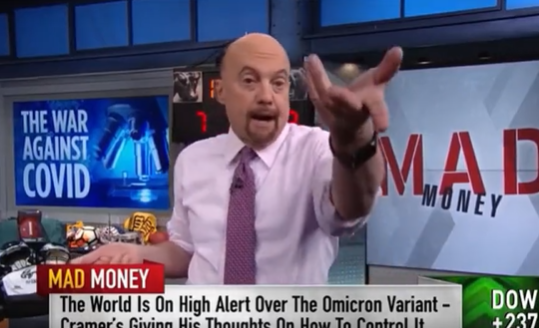 CNBC’s Jim Cramer has finally and officially lost his mind, Save Jerseyans, declaring on Monday’s program that there shouldn’t just be vaccine passports but MILITARY-ENFORCED HOUSE ARREST (!!!) for anyone who refuses to comply.

“So it’s time to admit that we have to go to war against COVID,” Cramer said during his “Mad Money” rant. “Require vaccination universally. Have the military run it. If you don’t want to get vaccinated, you better be ready to prove your conscientious objector status in court.”

There you have it. The media is now openly talking about deploying the military to force vaccinations.https://t.co/Q6mSEoktgh

That’s fine. Cause I’m gonna have Jim arrested the second I take power. He’ll be held in an undisclosed location until I decide he’s no longer a threat to the public.

@jimcramer says we need to require vaccination "to live in this country"@CNBC @SquawkStreet He needs to be fired for making medical recommendations with zero medical knowledge pic.twitter.com/M9caRYCY3j

It’s tempting to dismiss the notoriously nutty Cramer as an outlier on this one even among avowed Leftists (Cramer has picked fights with both sides over the years, once referring to Nancy Pelosi as “crazy” to her face), but I’m not sure that’s true in 2021. A pre-Election 2021 poll found 3 in 4 Democrats supporting Joe Biden’s floundering vaccine mandate plan.

Don’t think it can’t happen here. Variations of vaccine passports and even fines for the unvaccinated are increasingly in vogue around the globe.