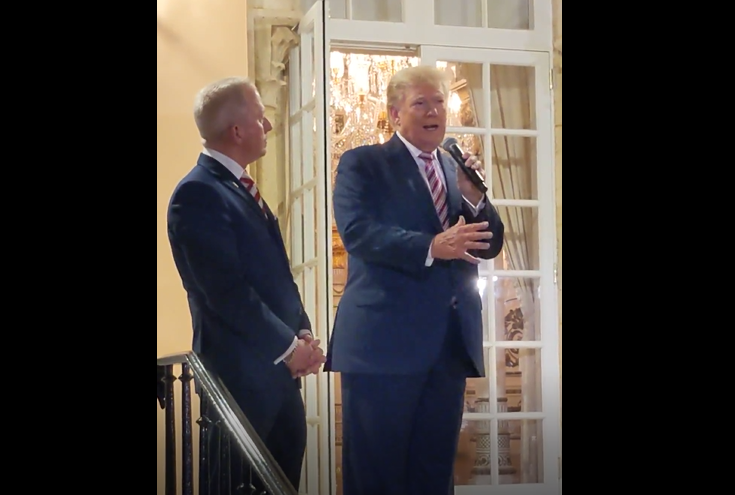 Elon Musk may be taking over Twitter, Save Jerseyans, but we’ve got a lot of work to do before there’s anything close to parity in the realm of social media.

Exhibit A: I found out over the weekend that YouTube had removed one of the videos from our channel. It went up in December 2021, so the tech gods curiously waited five months (!) to send me the message posted below which is a story worth exploring in of itself… 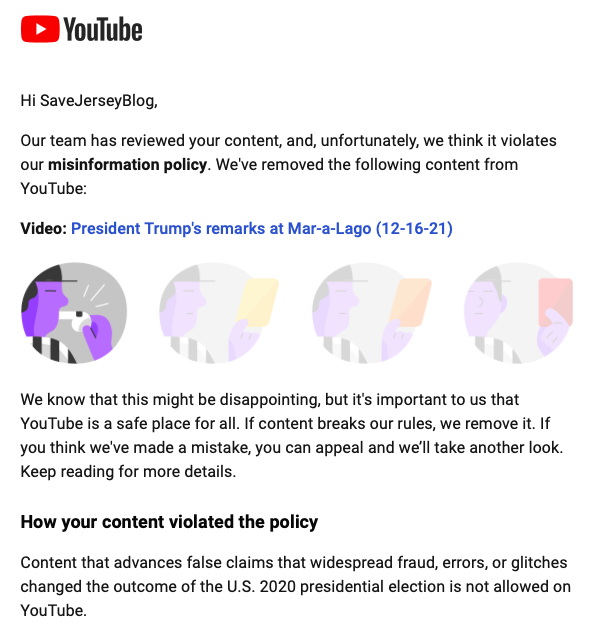 What was the offending video? A few-minute long clip of Donald Trump endorsing Congressman Jeff Van Drew (R, NJ-02) at an Mar-a-Lago fundraiser.

Other than a Trump quip made in passing (so quick you could easily miss it) about what he believes was the “rigged” 2020 election? The clip – which was undoubtedly newsworthy in its own right – had nothing to do with Election 2020, the “Kraken,” January 6th, QAnon, the MyPillow guy or any other alleged conspiracy theories. “Jeff took a chance,” Trump said in the innocuous in the now removed video. “And we talked, and we fell in love. But in the truest sense, I respected him immediately from the beginning and before I even met him; he wanted to switch because it was compatible with his views.”

What passes for dangerously-unacceptable “misinformation” these days never ceases to amaze even those of us who get the joke, folks.

“I was there. There was nothing ‘misinformation’ about anything he said,” said former Superior Court judge and incumbent Cape May GOP Chairman Mike Donohue in reaction to YouTube’s action. “These people are intent on destroying this country as we know it so that they can rebuild in their own dark, neo-fascist image.”

He’s not wrong, and you don’t need to watch ‘2000 Mules’ to fully appreciate the incredible hypocrisy at work here. Polls have found a majority of Americans questioning election integrity. Simply believing our elections need serious work doesn’t make one a tinfoil hat-sporting nut job. To the contrary, ignoring the need for reform is an act of insanity.

There are plenty of examples of surviving offensive content on YouTube that remain undisturbed while conservative videos are scrubbed on an hourly basis. More to the point at hand, Democrats routinely refuse to accept the legitimacy of elections they don’t like yet bear no consequences online.

Eliminating conservative speech is the endgame. Always has been, always will be. The only thing that’s change is that they’re no longer even attempting to hide it.

I’ll let you know if I appeal and what happens.