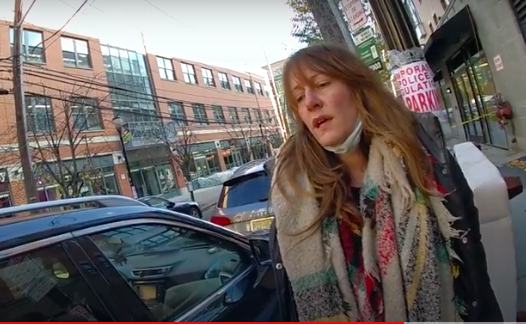 Earlier this week, we learned that she stands accused of striking a bicyclist with her car and fleeing the scene of the accident.

DeGise seems to have had the green light (and therefore the right of way), but leaving the scene of the accident is obviously a major traffic infraction and, circumstantially, a crime.

As it turns out, DeGise and motor vehicles don’t mix well.

Earlier today, we found out that she apparently tried t0 play the odious ‘don’t you know who I am’ card last fall to get out a parking ticket. The police body cam footage features DeGise telling Officer Ramon Calderon as her car was being towed (allegedly while being parked illegally and the vehicle being unregistered since 2019).

“A family member is an officer, I have their card on me,” DeGise tells Calderon. “If there’s any way I can have a ticket instead. Please.”

I know what you’re thinking: How has Amy DeGise not resigned?

She’s ignoring a growing chorus of calls for her to step aside.

I suspect the death of shame in this country of ours has something to do with it. There was a time and a place not all too long ago when it was not just okay to feel bad about yourself but also expected, and that was especially true when you had abused your power or violated the public’s trust in some way.

Our culture has changed for the worse. Shame is now a dirty word. It started with Clinton questioning the definition of “is” and the rot continues to metastasize. The new rule is to immediately dig in, concoct some bullshit excuse about being a ‘person in progress’ or whatever, and hope that the news cycle moves on before you’re forced to go.

If you’re Jim McGreevey? Play the victim class card and make it about your sexual orientation instead of the egregiously corrupt behavior actually responsible for the end of your political career.

If you’re Anthony Weiner? Rejoin Twitter (where you can get banned for the crime of questioning Anthony Fauci) and start a podcast.

Something’s not right here, is it?

There wouldn’t be a question about her resigning 25 years ago (unless her last name was Kennedy which it isn’t). Now? We’re led by the shameless, and our nation and its institutions certainly aren’t better off for it.