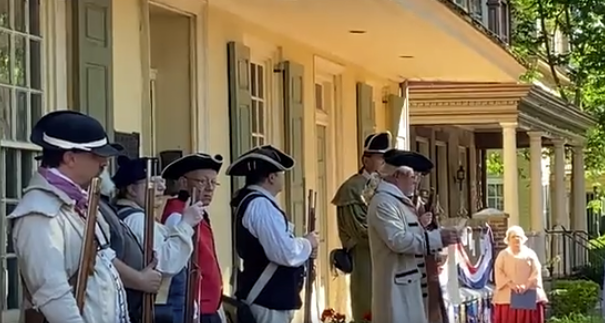 Independence Day is a wonderful excuse to play with fireworks, grill juicy burgers and enjoy summer weather, Save Jerseyans, but it’s also an opportunity to remember the history behind the day. A recent survey (to the surprise of no one) found 2 in 3 members of Generation Z unable to identify the country from whom the American colonies declared their independence. It’s a disaster!

That’s why I spent part of my July 4th morning in front of the historic Indian King Tavern in Haddonfield, New Jersey.

At 9:30 a.m., a group of enthusiastic reenactors gathered on the inn’s steps while the Declaration of Independence was read aloud for the gathered crowd who were waiting for the Camden County town’s holiday parade to get underway…

Situated along Kings Highway, Indian King Tavern’s colonial and Revolutionary era history is rich and storied in light of its strategically significant position right outside of Philadelphia.

There are plenty of a famous Revolutionary War sites in the Garden State (e.g. Princeton Battlefield), but the tavern is undoubtedly one of the most underrated in its importance.

Patriot generals including Anthony Wayne, the Marquis de Lafayette, and Polish Count Casimir Pulaski all spent time at the tavern planning their maneuvers, receiving briefings and resting for short stays during their long travels. The New Jersey legislature even met there for a time in 1777 after the British occupied Princeton and Trenton.

“Here, on the second-floor meeting room, laws that revised election procedures, created township governments and set up state courts were passed. Measures imposing martial law, strengthening the militia, regulating a war economy and providing emergency support to the Continental Army were taken,” explains the inn’s official website. “All this led to the freedom and democracy we now take for granted in these United States of America.”

If you haven’t had a chance to check out this South Jersey historical gem? Add it to your to-do list this summer! There’s never been a better time to revisit the people, stories and places that made America great.