According to PolitickerNJ, New Jersey Democrats are so upset that their leaders in the Assembly and Senate did the right thing for the future, and the taxpayers, of New Jersey by supporting the Governor and Republicans in the much needed reform of the pension and benefit system in our state that there is a small movement forming to vote them out of their positions. 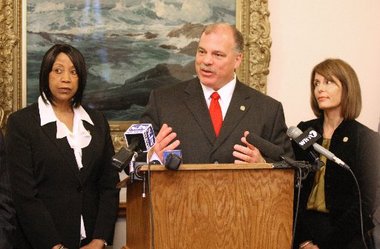 Democrats see it as a failure of leadership that just five months before the elections this year that a bill was put through a Democrat majority that makes key constituencies (ie. unions) so angry. If the Democrats want to have a civil war, I say we encourage them!

The people of New Jersey are looking for solutions, not stalemate. As poor as these leaders are in most situations, they finally did the right thing on this issue after months of trying to fight it. The voters are going to look upon this compromise favorably for both sides, the only people who wont are those who fought the bill tooth and nail.

By challenging Sweeney and Oliver, Trenton Democrats are just demonstrating how out of touch they really are. They would rather present a message that they support stonewalling the Governor on any progress and any hope of saving our state’s budget, rather than one of responsibility and posterity. A vote like that would be the best thing to happen to NJ Republicans since, well, since passing pension and benefit reform…I guess we are kind of on a roll huh?