Better Education for Kids (B4K) is complementing its “air” war against the ultra-liberal New Jersey Education Association (NJEA) with a mail blitz that hits this week.

You may find this piece in your mailbox after work today, Save Jerseyans: 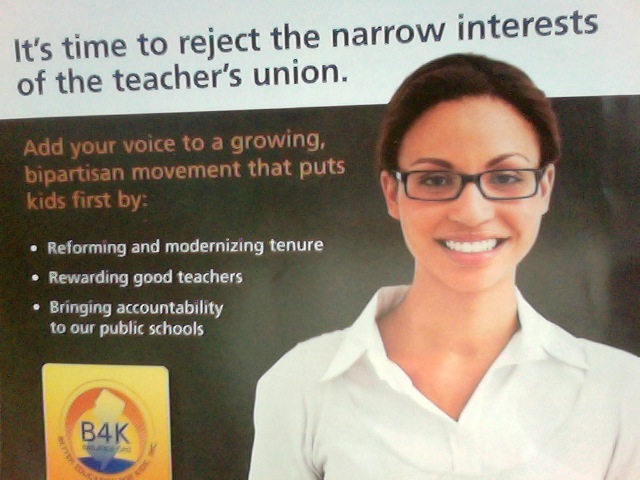 The mailer’s key theme is the lack of accountability in public education. It makes use of a particularly disturbing statistic: only 17 of approximately 100,000 New Jersey teachers have been removed for “ineffectiveness” over the past decade. Are there 100,000 bad teachers in Jersey? No. But are there more than 17?? We can say “yes” with mathematical certainty. Another major argument is the need for “a new voice… your voice” in the state education debate. Who can argue with that after years of the likes of Barbara Keshishian (the six-figure NJEA chieftain) and Chris Shelton (the CWA VP who compared Governor Christie to Adolf Hitler) dominating the debate and drowning out other perspectives with rivers of publicly subsidized dirty money.

Enter B4K which was conceived and launched by New Jersey residents and hedge fund tycoons David Tepper and Alan Fournier. Two familiar political consulting forces were brought on board to run the campaign: Mike DuHaime of Christie ’09 and the firm of Fox & Shuffler. The ED is Derrell Bradford who was with the Newark-based E3 organization and remains one of the state’s most passionate pro-school choice advocates. You can visit their website and find out how to help here.