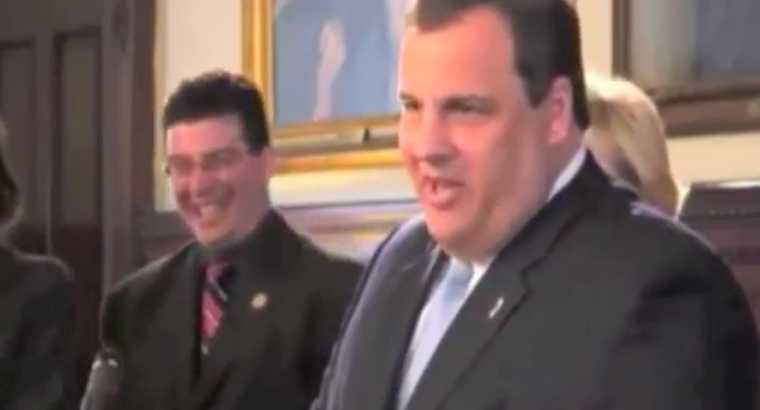 Gov. Chris Christie is all-Jersey; he speaks his mind in a take-no-prisoners, direct style and like an exit off the NJ Turnpike, his confrontations are numerous.

Whether he’s having a verbal battle defending his policy decisions while enjoying an ice cream cone on the Seaside Heights boardwalk or calling a reporter who went off topic an idiot, the NJ Governor doesn’t take any guff.

I attended two of his town hall meetings and both times he lays the ground rules in advance to the audience. Like a parent, he says “be respectful to me and I’ll be respectful to you.” Rule breaking won’t be tolerated.

His critics say he’s crude, rude and obnoxious. Personally, I find him refreshing and the best thing about NJ since the tomato.

And I’m surmising from the latest Quinnipiac University Polling Institute: so do most of my fellow Jerseyans…

50 percent say Christie is a leader, while only 45 percent say he is a bully. The highly coveted independents approve 55 to 42 percent.

As a political reporter I covered countless, overly prepared, coiffed, stiff politicians who were not only extremely boring and not credible but also ineffective and therefore very forgettable.

The poll also uncovered another unique trait about the Garden State: 65 percent of respondents agree that Trenton lacks civility and view it in a mostly negative light. The poll’s Director Maurice Carroll,= compares Jersey politics to those in Washington. And there we have it Save Jerseyans: Gov. Chrisite is rising to the occasion because he is being forced to.

It simply goes back to that old Darwin theory “survival of the fittest.” Most of us agree that we are in a battle for survival here in the Garden State.

And consider this: why are Christie’s favorable ratings at an all time high, 54 percent job approval rating?

Could it be we love his honesty and courage to fight back? Agree with his decisions, vetoes, endorsements or policies or not Gov. Christie says what he believes?

His style is dramatic and forceful and obviously most of us like it. The new Q-poll is just more proof.

179 thoughts on “New Q-Poll Results: Christie’s the Best Thing In Jeresy Since the Tomato?”