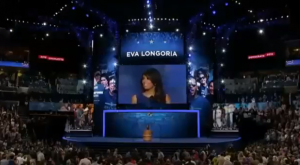 Do you want to know something that really irritates me, Save Jerseyans?

When people in Hollywood abuse their star power by speaking out on matters outside of their purview – e.g. POLITICS.  Everyone has an opinion, certainly.  But by normal person standards, we REALLY should bite our tongues every once in a while (or, in this particular case, hit that “Backspace” key a bit more often).

I am sure that by now you’ve heard about a recent Twitter faux pas committed by one of the sweethearts of the Democratic party, Eva Longoria.  She clearly was of the belief that she would be absolved from “sharing” a re-tweet of an obscene and offensive content since she is not the ORIGINATOR of said content. Oops.

If you have not heard about it already, allow me to share.

After the second presidential debate on Tuesday night, Longoria shared a “retweet” from one of her 4.4-plus million followers on the micro-blogging network. “I have no idea why any woman/minority can vote for Romney,” read the tweet. “You have to be stupid to vote for such a racist/misogynistic tw*t.”

Why would you think it was a good idea to share this????  And why in the world 4.4 million plus people in the world think you are worthy of a follow would be my next question, but I digress.

Needless to say, conservative women and minorities went ballistic, and rightly so.

Here are a few heated retorts…AMEN TO YOU, SISTAS!!!!

Wrote Diana Yellow (@navajochic): “I don’t appreciate u call’n me stupid. Ur ignorant, selfish and stupid urself! I’m a Romney/Ryan voter, I’m female and a minority.”

Becky Gonzalez (@nanabec2) tweeted: “You can vote with your lady parts — I’ll vote with my lady smarts. VOTE ROMNEY!!!”

Melissa (@melissaDiva) responded: “So @EvaLongoria b/c I am a woman and support @MittRomney I am stupid? Your comment is disgusting and disrespectful to women. Shame on you.”

Mayelin de Villegas (@mayelinddv) informed the starlet: “I am Hispanic. I am very informed on all issues. Will be voting for Romney and proud to say it.”

I mean, I can get really hot under the collar sometimes too, but I realize that there is a fine line between raising your voice and completely losing your head.

It’s really a shame that someone so pretty has such an UGLY streak.  And sadly, it isn’t her first offense.  Guess she didn’t learn her lesson the first time….

On October 11, our former “housewife” retweeted a crude one-liner from soap opera star Nancy Lee Grahn, “Biden is making Paul Ryan his prison b****!”  By the way – SO NOT TRUE!

Longoria’s version of damage control in these instances has taken her down several thousand pegs.  Did she really script those responses/pseudo-apologies herself?  It sure sounds that way.  Can someone please HELP her???

Oh, but she MUST have a grossly overpaid publicist to get her out of these sticky situations, right?  Let me tweet…  @Eva Longoria’s PR Rep, “Been pink-slipped yet?”

Ms. Longoria, you are exercising your First Amendment right, but it really is in poor taste, especially when so many young girls and women all over the world view you as a role model.  It is quite a large responsibility, so I urge you not to take it for granted.  Show a LITTLE class.  You’re all prim, proper and red-heeled around Washington, but on a computer screen, you’re really just another hater.

102 thoughts on “Would You Like To Try Some Of Our Humble Pie, Ms. Longoria? It’s Delicious!”