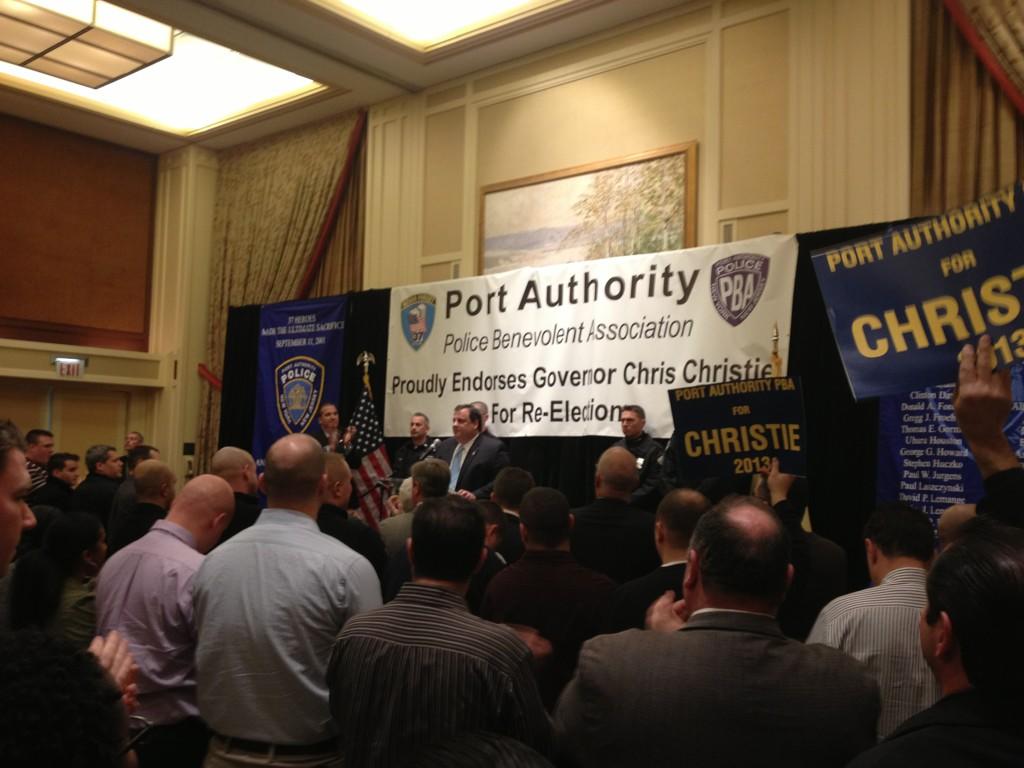 Governor Christie formally accepted the NY/NJ Port Authority PBA’s endorsement this morning, Save Jerseyans, with a crowd of 300+ Port Authority police officers looking on at the Newark Airport Hilton.

“Governor Christie has stood by the officers of the Port Authority of New York and New Jersey, and understands the commitment we make every day to protect the safety of New Jersey residents at area airports, bridges, tunnels, ports and within the PATH system and World Trade Center,” said PAPBA President Paul Nunziato.

“Governor Christie is a strong, decisive leader, most recently displayed during skillful handling of the challenges brought to our area during Sandy. As the former United States Attorney after September 11th, Christie understands that the Port Authority’s assets are among the most vulnerable terror targets in the world, and have already been attacked. He appreciates the great sacrifice we have made and has stood with us, both as US Attorney and now as Governor. For that, we’re proud to stand with him and endorse him for reelection.”

“I’m truly honored to have the support of the brave men and women who have dedicated their lives to protecting the rest of us,” said Governor Chris Christie. “The economy of New Jersey and the region are dependent on the safety and security of our ports, bridges, tunnels and rail stations. My administration is committed to strengthening the security of these assets which keep our residents safe and our regional economy moving. I look forward to the Port Authority PBA being a continued partner in the coming years.”

The PBA’s endorsement of the Governor’s commitment to transportation safety may help this fall if desperate Democrats try to resurrect the ARC tunnel issue.

7 thoughts on ““A Strong, Decisive Leader””