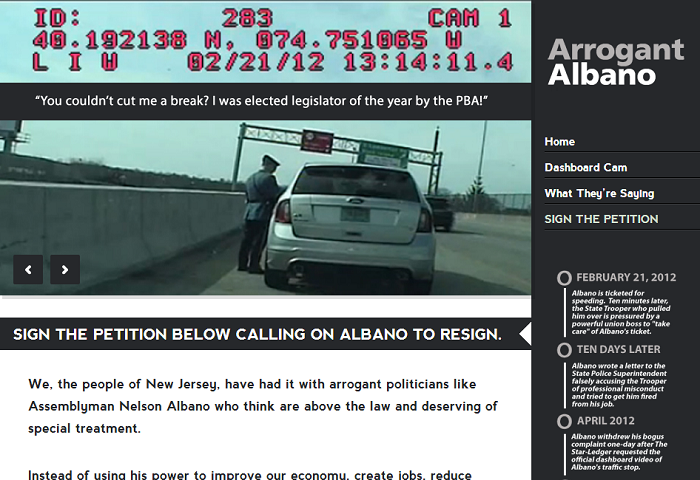 Election 2013 is officially underway in New Jersey’s most competitive legislative district, Save Jerseyans. The Cape May County Regular Republican Organization has launched arrogantalbano.com, a website that declares “We, the people of New Jersey, have had it with arrogant politicians like Assemblyman Nelson Albano who think are above the law and deserving of special treatment.”

A little background: about one year ago, Asm. Nelson Albano (D-LD1) receive widespread criticism from the media for “giving any appearence that special treatment was expected” during a routine traffic stop. Long story short, after Albano complained to the State Police about the trooper who pulled him over, the Assemblyman’s version of events was ultimately belied by the squad car’s video camera. Cape Republicans ask visitors to sign a petition calling on Albano to resign as a result.

The stakes are high in LD1. Albano’s running mate, Asm. Matt Milam, survived reelection by just over 1,000 votes in 2011 out of approximately 40,000 votes cast. The GOP is hoping to improve upon that performance with Governor Christie leading the ticket.