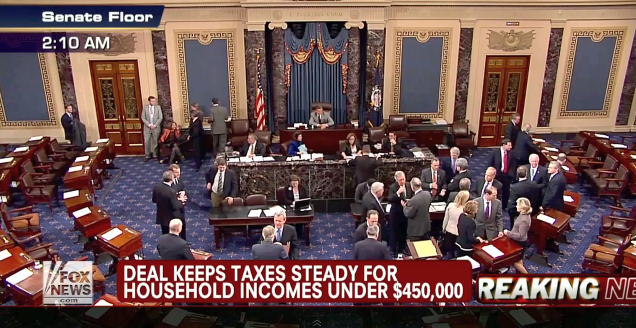 It’s a “deal” in the strictest sense of the word, Save Jerseyans, because there appears to be enough votes to get it through the House a little later today after the Senate adopted a fiscal cliff compromise package early New Year’s morning.

There’s certainly enough crap in there (like huge tax hikes and wind farm “incentives”) and a few good things (like a short-term tax reprieve for most middle class households and a repeal of ObamaCare’s unfunded CLASS program).

But when the fiscal cliff deal is passed without any attempt at entitlement reform, cuts just $1 from the federal budget for every $41 in new taxes levied, and delays the sequester question for two months…. is it really a deal to avoid a cliff? Implying that a “solution” has been reached? Or is it more properly labeled a detour? Same end result, only pushed a little further down the road?

You know where I stand.