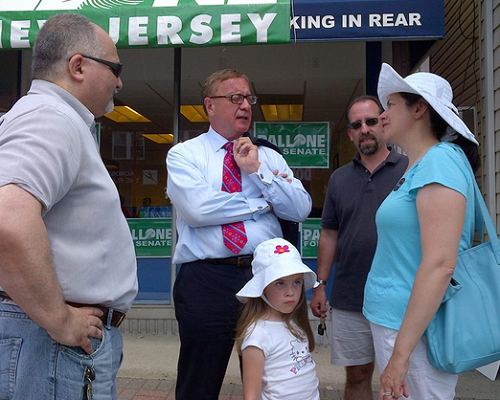 He still has to clear a primary election hurdle next month, but U.S. Senate hopeful Steve Lonegan came out of the long weekend swinging hard at his likely Democrat general election opponent; Cory Booker is taking a different approach by playing to his base to fend off potential rivals.

“Cory Booker’s plan to increase welfare benefits and government handouts is even more extreme than any of the left-wing ideas the Obama administration has proposed,” Mayor Lonegan said at a Monday morning press conference. “It’s proof that not only will Cory Booker be a rubber stamp for President Obama in the U.S. Senate, he will go even further – increasing the deficit further, destroying more jobs, and making even more Americans dependent on the federal government…

It is these kinds of welfare programs that ruined great cities like Newark, and now Cory Booker wants to force these same failed ideas on the rest of the nation. As a U.S. senator, I will work to undo these policies and fight for less government, more personal responsibility, and greater individual liberty.”

Lonegan’s not exaggerating when he says Booker’s plan is more extreme than the President’s own, Save Jerseyans.

Among Booker’s latest “ideas” is a proposal to raise the federal minimum wage to $10.10 per hour. That’s $1.10 more than President Obama’s SOTU pitch and much more dramatic than even the New Jersey Democrat plan (on the ballot this November) to peg increases to the consumer price index. New Jersey’s current minimum wage is $7.25.

Imagine what a $2.80 per hour, per worker increase will do to our depressed U.S. labor market the next time you patronize a small business. There’s a reason why America’s second largest employer is a temp agency! Politicians like Cory Booker…