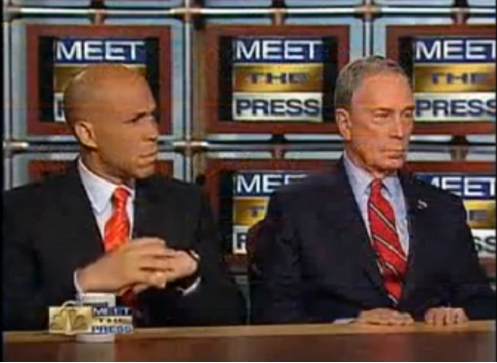 His PAC is launching a major $1 million television ad buy in support of Cory Booker (D-Twitter).

Let’s drill down on my favorite part for a brief moment. A little background is in order: Booker and Bloomberg have jointly appeared together on numerous occasions; here they are on Meet the Press back in 2009 discussing unemployment in their respective cities…

The unemployment rate in Newark at the time of their ’09 Meet the Press lovefest (as reported by NBC) was 14.3%.

As of July 2013, Newark’s unemployment rate had fallen to… 14.2%, or a few full points higher than when Booker first took office.

And lest we forget, how came Bloomberg back Booker’s record on guns and violence with a straight face when the Brick City’s streets are increasingly resembling something out of a western movie?

If you like the guy and have money to burn, Mr. Mayor, then go ahead and buy him an ad. That’s what millionaires do for their buddies. Just please don’t insult our intelligence and pretend you’re dropping millions of dollars on the strength of his non-existent record of job creation! That’s ludicrous…