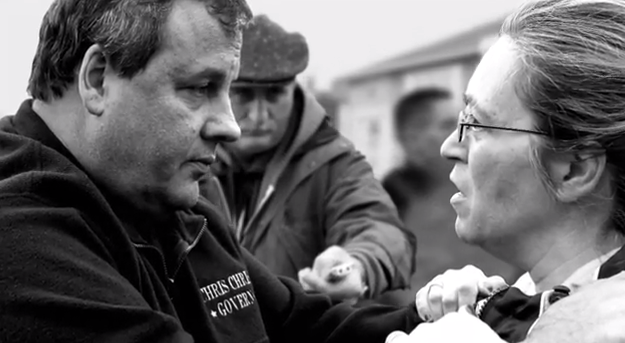 Governor Chris Christie is bring his vastly superior financial resources to bear against the hapless Barbara Buono (BWOH’-noh), Save Jerseyans, while simultaneously trying to expand the legislative map in North and Central Jersey.

“The first person I saw when I got off the helicopter was a woman. She saw me and she burst into tears. And she said to me ‘everything’s gone, you have to help me.’ I think people wanted me to tell them that it was gonna be ok, and that I wouldn’t forget them. And I know that there’s nothing more important for me to do as Governor than to complete the mission of bringing their lives back to normal. I know we still have work to do, but I really believe, finally, New Jersey’s moving in the right direction.”

Governor Christie consistently acknowledges that the Sandy recovery effort is incomplete. Many affected residents, however, remain less than satisfied with the progress made thus far.

“The Sandy recovery effort is certainly a tale of two states,” said Patrick Murray, director of the Monmouth University Polling Institute that recently found that only 38% of those displaced by the storm were satisfied with the state’s response. “New Jerseyans who were displaced by the storm, even if they are now back in their homes, are significantly more negative than other Garden State residents about the pace and focus of recovery.”

In my final analysis, Governor Christie’s only major misstep was endorsing a federal response that ultimately came up very short.

Thousands of folks are still homeless. Only a tiny fraction of the giant federal rescue package which House Republicans were lambasted for “holding up” has been put into the field. The $5.67 billion cited by officials has come from a variety of sources. FEMA has actually made matters worse for many residents and, in other instances, ideological roadblocks stymied recovery.

Still, Governor Christie continues to benefit politically, in my opinion, not simply from what he has actually done for New Jersey storm victims but, in a roundabout way, voters’ perceptions of how he might’ve done better as head of a federal government that they view as hopelessly dysfunctional, all despite his general endorsement of the Obama Administration’s assistance. Go figure!

Have you missed any of this cycle’s New Jersey campaign ads? Don’t worry. We have a healthy number of them right here at Save Jersey.