I wanted to bring this up earlier in the week, Save Jerseyans, but Bridgegate knocked me (and the rest of New Jersey’s political watchers) off of the pre-planned programming schedule.

In doing so, however, the former Newark superhero-turned-loyal Reid soldier inadvertently admitted something extraordinary and very inconvenient for his party’s prevailing narrative… 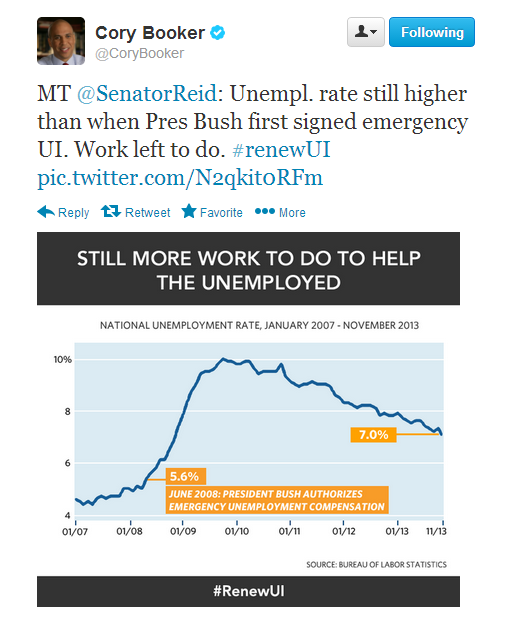 Whoa! Did Heritage Action get a hold of his account or something?

Senator Booker is actually admitting what was verified yet again by Friday’s abysmal job numbers: the Obama job market is the worst of our lifetime. Nearly 100 million Americans are now out of the work force, the worst level of participation since 1978. There’s no recovery. Stagnation is the order of the day.

When is he going to stop crying to the Twitterverse over treating the symptoms (e.g. extending unemployment benefits) and get serious about curing the disease (e.g. repealing regulations and taxes, Obamacare chiefly among them, that are killing job growth)?

The answer is NEVER if his Brick City track record is any indication. We’re sure it is.