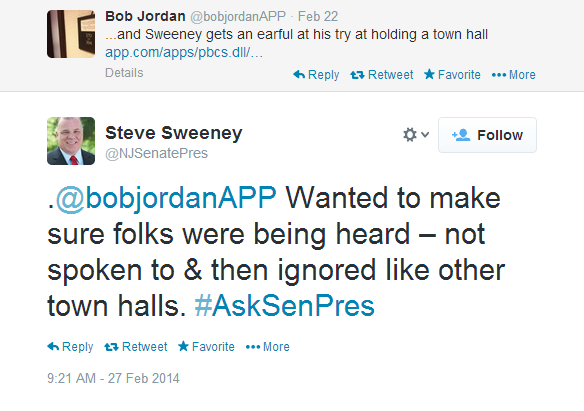 I believe the kids call this “talking smack,” Save Jerseyans:

It was only a few short months ago that Senate President Steve Sweeney (D-West Deptford) and Governor Chris Christie (R-Mendham) raised eyebrows (and my blood pressure) by openly holding events together and celebrating their working relationship in a region contested by the Governor’s own down-ballot running mates.

There was a time when I compared the pair to Ronald Reagan and Tip O’Neill, and at the time, I think my analysis was pretty spot-on. Sure, you never saw Reagan rallying with Tip O’Neill in his district on the eve of an election, but this is New Jersey. We grade on a curve for better or for worse.

Now you’ve got Sweeney dropping tweets and press releases referring to the Governor’s Sandy recovery explanations as a “smoke screen” and Christie chastising “[l]et’s not start running for governor now” as his new detractor-in-chief not-so-secretly fights to land his party’s nomination.

Smack talk isn’t foreign to this relationship. Both men give as good as they get, though Sweeney’s mouth is particular in need of a bar of soap. What’s different today? Governor Christie bragged back in October 2013, standing which Sweeney at his side, how he and the leading Democrat “curse at each other, but we get things done.”

An uncharacteristically defeated-sounding Christie, his voice hoarse and cracking, delivered a budget address on Tuesday devoid of bold new initiatives. No renewed call for tax cuts. No bold school choice voucher initiative. No grand discretionary spending cuts. He’s playing safe, small, unimaginative ball in an effort to escape the relentless media Bridgegate drum beat but it’s not working, as predicted; his approval rating is out of the stratosphere and hovering around 50%.

The one relative highlight – our Governor’s admirable albeit unspecific call for additional pension reforms – was met with dismissive derision from Sweeney and his colleague, Speaker Vincent Prieto who, by the way, not only refuses to consider tax cut or pension proposals, but also wants to create new taxes while raising old ones. A real winner, huh?

Disaster inevitably occurs when important historical lessons are forgotten. Governor Christie was a rock star in 2010 and 2011 because he won arguments and elections to force Democrat cooperation. He beat the NJEA into submission in the court of public opinion. He scared Democrats into backing moderated but unquestionably significant pension, benefits and property tax reforms. He ground disgustingly-biased reporters into paste by calling them out, in public, for their hack tactics.

Lame duck status was guaranteed,and the revolution went off the rails, when the GOP failed (and in many cases didn’t try) to generate any legislative gains last fall. Bridgegate merely made it take effect immediately. The seeds were sown before a single stupid, salacious email left any Christie staffer’s inbox.

I’m not trying to bum you out on a Friday. I simply want you to learn from the mistakes of our leadership at the tail end of an extremely telling week. My mission is pedagogical in nature and effectuated in the best of faith.

The lesson: we can’t work with these people UNTIL we beat these people, Save Jerseyans. Scream it from the valleys, shout it from the hill tops, then put it into action in your own communities. This state sure as hell isn’t going to save itself and, as the Democrat high command made painfully clear this week, we’ve got a lot of people to beat before the battle to SAVE our state is won.

46 thoughts on “We Can’t Work with These People”