When Speaker of the House John Boehner’s caucus didn’t immediately sign off on a massive, bloated Superstorm Sandy relief package in early 2013, Save Jerseyans, Chris Christie’s outrage could be heard at all ends of the earth.

“We respond as Americans,” Christie bellowed following a congressional adjournment which occurred without a vote, “at least we did until last night… it was disgusting to watch.”

A majority of conservatives were of a decidedly different opinion, ranging from disinterest to feelings of betrayal. Their disgust was reserved for an event that occurred approximately two months earlier, before the Mitt Train officially derailed, when the rockstar GOP Governor embraced President Obama on Garden State soil, a move which public exit polling suggested could’ve helped move the needle in the incumbent’s direction in key 2012 battleground states like Virginia and Ohio. Base political calculation at its worst? Or simply emotions getting the best of an emotional guy?

My take at the time was as balanced as anyone could expect from a conservative blogger: it was foolish to fault Christie for refusing to leave his storm-ravaged state for a political rally, or even for hosting the Commander-in-Chief upon the White House’s request, but I also argued that the Republican Governor’s overly-effusive praise of an as-of-yet-untested federal response was premature at best and would likely prove to be the real mistake with the passage of time.

I genuinely, sincerely hate to say “I told you so,” folks, but I most certainly did. Now look at the mess in which our Governor finds himself heading into Thursday’s much-anticipated Middletown town hall meeting, the first such gathering since Bridgegate and Sandygate changed everything for the inhabitants of Christie World…

It’s ugly. Real ugly. But there’s still a way out. 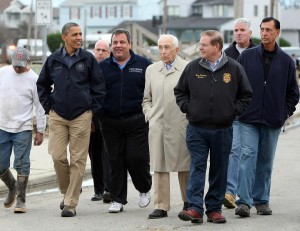 Chris Christie is very much a man on an island right now. He’s in bunker mode, playing defense and resigning himself to small ball gimmicks rather than making big moves to change the narrative.

That’s a mistake of epic proportions.

The media and most Democrats were always going to abandon him at some point in the game. Only the dangerously self-deluded believed otherwise. Bridgegate merely flipped the switch and provided the opportunity. They’re all-in for President Hilldawg from this moment on until the bitter end. He’s not alone although it’s little comfort; they’re trying to take out Scott Walker and everyone to the right of him, too. Hillary’s ambitions aren’t even the whole story. Here at home, Steve Sweeney just declared the Sandy recovery a “failure,” turning on his Republican ally of convenience, and undermining the pillar of November’s reelection landslide, all in order to strike the right tone for his own anticipated Democratic gubernatorial campaign.

The Governor can take it from Dems. Chris Christie’s greatest peril lie in the fact that previously skeptical movement conservatives AND newly-weary mainstream Republicans seriously doubt the quality of his brand in light of recent events.

You’ve heard it or thought it: “How can we hitch our wage to a guy who made his bones as a straight-shooter when he’s laying low and cutting deals with Democrats instead of forging ahead and fighting back?”

The Governor needs to fight back by reviving his 2009 brand and abandoning the fantasy of a grand national coalition comprised of folks who will NEVER love him owing to the “R” affixed after his surname. Not gonna happen. Ever.

The good news? Democrats are giving him plenty of opportunities to right the ship and, frankly, few other choices; the Obama Administration’s transparently-partisan decision to turn down Sandy waiver requests, stymieing displaced residents’ rebuilding efforts, clearly flies in the face of the President’s promise to tear up red tape:

Paging Chris Christie: you need to get a physical if THAT doesn’t raise you blood pressure!

So if I’m him, I use Thursday’s Middletown meeting to come out swinging against the guy whose federal government is dropping the ball when Jersey Shore residents are suffering and, for good measure, his party-mates in the hapless New Jersey congressional delegation whining about unemployment benefits and scheming for Capitol Hill promotions while their constituents are forced to squat in motels.

Don’t hold back on the Trenton Dem branch either, one that’s trying to raise the gas tax while New Jerseyans are trying to rebuild or planning their vacations to the Jersey Shore (usually facilitated by fossil fuel-powered cars).

Fight for the silent majority that’s much more interested in results than feigned displays of “bipartisanship” that engender more debt and little else.

I’d like to see our Guv take the White House, HUD or FEMA apart with the same ferocity with which he lambasted the GOP House and the NJEA in years past, Save Jerseyans.

It also happens to be the right thing to do and in his own best interest. Isn’t it great when they’re in harmony?

47 thoughts on “Christie Needs to Throw Down in Middletown”