Justified or Not, Anti-Christie Angst is Real

In the four years that this website has been operational AND covering Chris Christie, Save Jerseyans, I can’t remember seeing more Republicans rake him over the coals.

Anti-Christie angst is moving from the “anecdotal” to the “too many to be anecdotal” realm. I’ve spoken to or interacted through Save Jersey with folks who were confirmed Christiephiles in 2009. Rank-and-file types. Attended phone banks. Patronized events. Begged coworkers to “give him a chance” in this reliably blue state. In a few cases, they worked for GOP affiliated groups that lent him support. And they’re not mad today. They’re positively furious.

They really, truly think Chris Christie played a material role (ranging from “not helpful” to “intentional,” depending upon who you ask) in “sinking” Mitt Romney by hosting President Obama for a Halloween Hurricane Sandy damage inspection tour. That tour is now haunting those who harbored presidential aspirations for New Jersey’s top Republican.

About four voters in 10 say Obama’s response to Hurricane Sandy was important to their vote (42 percent), and they backed the president by a better than two-to-one margin.  Fifteen percent said it was the “most important” factor in their vote.”

Let’s add a little perspective to this discussion.

It’s important to remember that exit pollsters don’t follow people into the actual voting booths. We have no way of knowing, for example, whether those 4 in 10 were already Obama backers before Hurricane Sandy. And while it’s now clear that voters broke Obama’s way post-Sandy in the apparently super-accurate RCP average, it’s also true that Mitt’s own RCP average rating stopped climbing back on October 9th not long after the first debate. He was at 48% then. He finished at 48.1% on Tuesday. The final RCP average? 48.1%. I’ll never doubt them again! 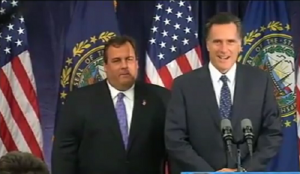 Whether or not you think Christie “gushed” to much, other factors played an objectively larger role in Governor Romney’s defeat. For example: did the GOP go from winning 44% of Hispanic voters in 2004 to 31% in 2008 and just 29% in 2012 because of a Christie-Obama photo op?

But key elements of the base and the professional donor class aren’t appeased by exit poll stats, nor are they persuaded to look the other way by Christie’s early Romney endorsement, frequent campaign appearances and unmatched fundraising schedule over the preceding months. Perception is important and perceived disloyalty is punished. The WashPo account of a private Wednesday breakfast hosted by Romney for key supporters drives the point home:

Everybody feels like they were a bunch of well-meaning folks who were, to use a phrase that Governor Romney coined to describe his opponent, way in over their heads,” said one member of the campaign’s national finance committee, who requested anonymity to speak candidly. […]

“A lot of people feel like Christie hurt, that we definitely lost four or five points between the storm and Chris Christie giving Obama a chance to be bigger than life,” said one of Romney’s biggest fundraisers, who requested anonymity to speak candidly.

Will it all blow over? Quite possibly. The Governor is a uniquely talented politician. Four years is a long, long time in the political universe, and he went into Hurricane Sandy with a solid approval rating here at home. Don’t assume anything this far out, including a Christie candidacy.

I’m simply acknowledging how he’s got work to do after this week. Justified or not (and I personally think many of the anti-Christie claims are overheated), the Governor now has a legitimate GOP base problem. That may not matter in 2013 if there are enough “Christiecrats” out there in the Garden State next fall, but it will carry consequences if he’s still interested in going national.

21 thoughts on “Justified or Not, Anti-Christie Angst is Real”