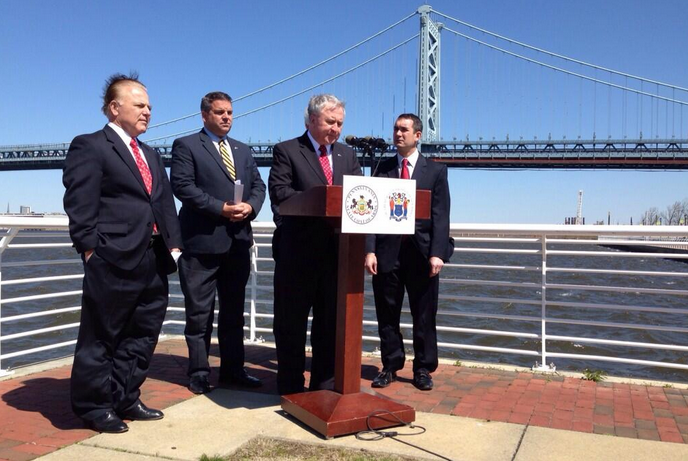 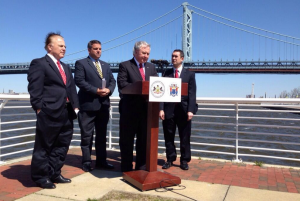 Trenton Democrats prefer to demagogue whenever there’s something to be gained from it, Save Jerseyans, but in the wake of the Bridgegate scandal, their Republican counterparts have put forth a myriad of measures designed to rein-in out-of-control independent authorities.

We’ve covered recent proposals pertaining to the Port Authority of New York and New Jersey. Far too few New Jerseyans are likely aware that there’s a second ongoing federal probe at the moment in our state (not counting Hudson Bob), this one targeting the Delaware River Port Authority (DRPA) at the extreme opposite end of the N.J. Turnpike.

A few stalwart souls are trying to do something about it. On Thursday morning, Pennsylvania Senator John Rafferty, New Jersey Senator Joe Pennacchio and Pennsylvania Representative Mike Vereb held a press conference in the shadow of the Ben Franklin Bridge to annouce bi-state legislation which they believe, if passed, would bring much-needed change to the notoriously corrupt Delaware River Port Authority.

“People have long been at the breaking point with the DRPA and are demanding better transparency and accountability,” said Senator Pennacchio (R-26), who also serves as a New Jersey State Senate Transportation Committeeman. “The DRPA must use the people’s money to provide the best possible transportation via its regional railway and four bridges. They are not an ATM to be used for outside development. This legislation is a wake up call to the DRPA: Representatives in both New Jersey and Pennsylvania will not tolerate any more abuses.”

GOP attempts to clean house at the DRPA are nothing new. Save Jersey has outlined how the DRPA ATM machine operates. Republican members of the SCI even sent a letter to Speaker Prieto last month asking for a renewed focus on the bi-state agency. Crickets, Save Jerseyans. Why? ‘Cause DRPA is a Democrat machine patronage pit, so there’s nothing that they have a political interest in uncovering down in South Jersey.

More than a few eyebrows (and the acid levels in my stomach) were raised several months ago when Governor Christie elevated the former DRPA chief to the state judiciary despite his leadership (or lack thereof) during a scandalous period in the agency’s history.

We’ll continue to make the argument notwithstanding a lack of will power in Trenton to do anything about it. Here are some of the key elements of the proposed legislation; the economic development prong is CRUCIAL since DRPA dumps millions of toll hike-generated dollars on projects that have NOTHING to do with transportation/bridge construction and/or maintenance:

·         Prohibit the DRPA to engage in economic development activity;

·         Establish a Port Authority Transit Corporation (PATCO) Commuter Council to study, investigate, monitor and make recommendations pertaining to the maintenance and operation of PATCO’s facilities for the transportation of passengers, including those with disabilities;

·         Restrict DRPA board member, officer and employee perks by prohibiting –

o   Any personal lines of credit from DRPA;

o   The acceptance of any gifts that could affect the conduct of DRPA business;

o   The hiring of immediate family members of current commissioners, officers, directors or employees; and

o   Salaries to be higher than those of the Governors of Pennsylvania and New Jersey.

·         Prohibit DRPA officers and employees (at the director level and higher) from being employed by an entity that does business with DRPA for two years after the individual leaves DRPA service;

·         Prohibit DRPA management from receiving their salaries until audits are complete;

·         Prohibit officers and employees at the director level or higher to hold outside employment during their tenure at DRPA;

·         Require board members to file financial interest statements and identify any potential conflicts of interest in writing in advance of board meetings;

·         Prohibit any transaction or professional activity and engaging in any outside business that presents a conflict of interest with DRPA duties;

·         Prohibit charitable contributions by board members and officers on behalf of DRPA;

·         Provide 30 days public notice prior to any vote concerning a contract;

·         Prohibit DRPA from negotiating, extending, amending or otherwise altering the terms of a contract, or entering into a contract, unless the action is taken by the DRPA board at a public meeting;

·         Require the use of best practices in procurement and the acceptance of bid proposals online; and

·         Require current and prospective vendors to disclose a list of political contributions annually and for the prior four years.